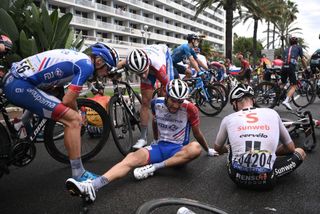 Riders have warned race organisers that they will again take control of the peloton and neutralise the racing if they feel in danger, with 30 riders forming a group of representatives at the Tour de France to lead a united peloton.

During Saturday’s opening stage around Nice, dozens of riders fell on the slick roads that turned slippy due to the first end of summer rain. Tony Martin (Jumbo-Visma) eventually waved his arms to neutralise the peloton before the final climb and descent of the Côte de Rimiez and the truce only ended back on the coast road for the sprint finish.

Riders decided to take control of their own safety and become far more vocal after a number of crashes and dangerous incidents since the return of racing. Many were shocked by Fabio Jakobsen’s high-speed crash over the barriers in the sprint at the Tour de Pologne and Remco Evenpoel’s crash over a low wall at Il Lombardia.

Some riders have criticised their own Cyclistes Professionnels Associés (CPA) riders association but according to a report by Het Nieuwsblad in Belgium, a group of 30 influential and respected riders have formed an online chat group to exchange information and opinions.

It seems the pre-race talks amongst the riders via the group created far more unity and sparked Saturday’s solidarity.

"What happened on Saturday was the most powerful signal that we as riders can give," De Buyst told Het Nieuwsblad.

“It was time for us to take responsibility for our own safety. We did that on Saturday,” Jasper Stuyven said.

The group seems to have replaced any kind of patron of the peloton. In the past the Tour de France race leader often took charge and lead any protests or a big-name rider used their importance to represent the rest of the peloton. Now the riders are more united and unionised.

“This CPA group is better than one patron. Now all teams take their responsibility. Together we form one great patronage,” Trentin pointed out.

On Monday the CPA issued a statement calling on race organisers to step up and do more to protect rider safety.

“The CPA has been working with the UCI for months on this issue and would like to be able to do the same with the organizers in order to jointly provide effective and pragmatic solutions to this problem,” the CPA statement reads.

“I’m happy with the uniform approach of the guys competing in the Tour. As I always say, united we are stronger,” Bugno said.

“We want to collaborate in a constructive and relevant way with the other stakeholders, but we will be uncompromising and firm if other incidents such as those in the past few days should occur again.”

Naesen admitted that the riders are trying to find a balance amongst rider opinions and stop any abuse of the solidarity.

“After every crash or incident, there is always one fool who works hard to go on strike and not race the next day. That is not really constructive,” Naesen told Het Nieuwsblad.

After Thibaut Pinot and David Gaudu crashed hard on Saturday, the Groupama-FDJ riders apparently pleaded for a go slow but with ulterior motives.

“Their representatives sent a request to neutralize the second stage and finish it at an average speed of 30 km/h,” Naesen revealed.

The proposal was immediately swept off the digital table.

“I think it's a real shame that they even dared to ask something like that. This initiative is not for that purpose,” Stuyven said.

“Of course self-interest will always play a part,” Naesen admitted. “It suited Jumbo-Visma on Saturday that the stage was neutralized. That way their leaders made it to the finish safely, but as long as it is also favorable for the other riders, I see no problem with that.”