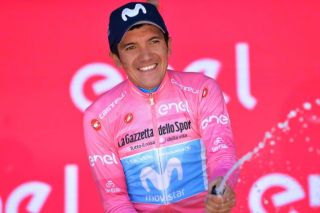 Richard Carapaz has confirmed that he will return to the Giro d'Italia in October to defend his 2019 victory, with the Ecuadorian climber expected to lead Team Ineos in the corsa rosa after joining the British WorldTour team from Movistar.

Egan Bernal, Geraint Thomas and Chris Froome are expected to lead Team Ineos at the Tour de France, each recently revealing their determination to be at their best in September and so fight for eventual team leadership on the roads of France.

Carapaz is happy to focus on the Giro d'Italia in October and revealed that Team Ineos have decided much of his race programme after the UCI announced the new-look WorldTour calendar last week, with racing packed between August and November.

Any racing depends on how nations control the COVID-19 coronavirus pandemic in the next few months and limit the chances of a second wave of contagion. Races are likely to be held with strict crowd restrictions and medical protocols for riders and the race caravan. Carapaz is likely to return to Europe early in the summer to avoid any quarantine problems and prepare for the Giro d'Italia. He is likely to ride Tirreno-Adriatico in September as key build-up to the race.

"We've decided virtually all of my programme. The Giro d'Italia is still my biggest goal," Carapaz told Italian television channel RAI Sport as part of a full interview to be broadcast later on Tuesday.

"I want to be at my very best for the Giro, so I can try to win it again and repeat the success of last year."

Astana have said Jakob Fuglsang will target the Giro d'Italia in October, with Remco Evenepoel due to lead Deceuninck-QuickStep. Vincenzo Nibali is also keen to focus on the Giro d'Italia but his goals could be influenced by decisions of his Trek-Segafredo team and the need for success at the Tour de France.

The Giro d'Italia will be held from October 3-25, with the opening stages in the south of Italy before following the already announced route. The Grande Partenza, originally planned for Hungary before its cancellation, could return in 2021.

Carapaz joined Team Ineos from Movistar for 2020 after his breakthrough success at the Giro d'Italia made him a national hero. But he has remained grounded and has spent the COVID-19 pandemic lockdown at home in the Carchi Provence of Ecuador, close to the border with Colombia.

"After I won the Giro d'Italia things were crazy here in Ecuador," he said, recalling his Giro d'Italia victory and the huge homecoming celebrations.

"People were really proud of my victory and identified in me, everyone felt part of my success. That changed a lot of things for me and I became famous. It wasn't easy to deal with art first but I'm trying to use to do good. I like the idea of helping talent young athletes do well via my cycling school. The country is changing ands now a lot of people are dreaming of success.

"It's a difficult moment and we've been hit by the pandemic just like the rest of the world in recent months. Fortunately the Carchi area we've been lucky. We've been isolated and so the number of cases has been relatively low. I've been fortunate that I've been able to stay with my family and make up for the lost time."