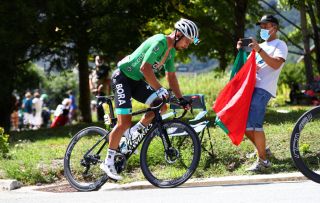 Bora-Hansgrohe’s Peter Sagan was on the attack on stage 2 of the 2020 Tour de France as part of his quest to take an eighth green points jersey title (Image credit: Getty Images Sport)

As part of his bid to win an eighth green jersey at the Tour de France this year, Bora-Hansgrohe's Peter Sagan went on the attack on stage 2 on Sunday to pick up points, and already looks to be living up to his billing as the favourite for this year's points competition – despite the green jersey still being held by the winner of stage 1, UAE Team Emirates' Alexander Kristoff.

Although he was already wearing the green jersey during stage 2, Sagan was in fact only keeping it warm for Kristoff, who wore the yellow jersey as race leader, with Sagan wearing green by virtue of his third place in the competition, as second-placed Mads Pedersen was in the white jersey as best young rider.

The Slovakian nevertheless began the process of trying to beat what is already his now record of seven Tour points titles by forming part of the day's early breakaway on stage 2's hilly route around Nice. He could only finish second to CCC Team's Matteo Trentin at the intermediate sprint just 16km into the stage, but while Trentin dropped back to the bunch, Sagan must have decided he needed the extra training for the coming three-week fight, and pushed on, with Bora teammate Lukas Pöstlberger along for the ride as company as part of the seven-man group.

Sagan was eventually dropped on the climb of the Col du Turini, but it would appear to have been a grand day out for the 30-year-old.

"It was a long day, but a good one," he said on his team's website. "I had to fight to get more points for the green jersey, and I think we did a good job of that in the intermediate sprint.

"It was a very hard stage, and our focus was to have Peter score additional points in the intermediate sprint," confirmed sports director Enrico Poitschke. "Lukas and Peter went into the breakaway, and that worked very well, as Peter took second [at the sprint]."

Sagan is likely to continue to go on the attack as the race continues, but the likes of new race leader Julian Alaphilippe (Deceuninck-QuickStep) and the other overall race favourites are also likely to come further to the fore over the coming days, and could take large points hauls by virtue of stage wins alone, with relatively few flat stages on offer for the sprinters at this year's race.

But unless a GC rider – or non-sprinter – emerges as a contender for the green jersey, Sagan could eventually find himself unopposed in his march for an eighth title. Perhaps the only rider looking capable of taking him on at the intermediate sprints, as the hillier stages that make up this Tour come thick and fast, is Trentin.

Despite Bora-Hansgrohe's efforts so far, Kristoff still leads the points competition – by 18 points over Sagan – but the big Norwegian might be hard-pressed to defend his lead in the coming days.

"It was nice to spend the day in yellow," said Kristoff, who had to pass the race lead to stage 2 winner Alaphilippe. "It was a first time for me – maybe it will be the last – so I tried to enjoy every moment of this new experience, even though it was a very demanding stage.

"Tomorrow [Monday, stage 3], I'll be in green, and it will be another beautiful day to savour," he said.