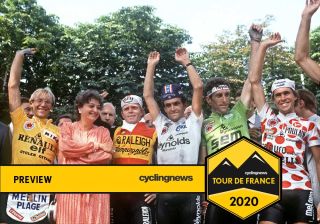 Four-time green jersey winner Sean Kelly believes that Bora-Hansgrohe's Peter Sagan will be the leading favourite once again for the points classification at this year's Tour de France, but when it comes to predicting who will be the most successful sprinters in the race, the Irishman feels that the situation is less than clear.

There are a limited number of sprint stages at this year's Tour, with Caleb Ewan (Lotto Soudal) stating that there are a maximum of six sprint-friendly days between Nice and Paris. The Tour route is tipped towards the climbers this year, and even some of the intermediate stages are littered with tough finales and climbs that threaten to dislodge the pure sprinters from the peloton. Given the stop-start season that the riders have endured, Kelly believes that predicting who the most successful sprinters will be is a tough ask.

"Going into the race, you'd probably say that Sam Bennett [Deceuninck-QuickStep] and Caleb Ewan were the fastest ones in the race, but we're going into the unknown because we've seen good flashes of them, but then they seem to struggle on another day. Because of the little racing that we've had in the last few weeks, we've not really had a proper test to see who has been going well," Kelly told Cyclingnews on the eve of stage 1.

Kelly also threw both Sagan and Elia Viviani (Cofidis) into the mix, but neither rider has won a race this year. Sagan still arrives at the race as the record holder in the green jersey competition, with seven titles, but Viviani hasn't taken a victory since moving to Cofidis at the start of the year. The Italian's last win came at the Cyclassics Hamburg last August.

"After Bennett and Ewan, you've got Sagan. Originally, he wasn't meant to be at the Tour, but there's also Viviani, and it will interesting to see how he will perform. The Tour is pretty mean on sprints this year, and for Viviani, he could have a bit of a mental battle on his hands because he's not won all year. Can he get it right during the Tour and rectify his season? His confidence won't be as high as some of the others, but because of how the racing has been going, no one really has had a proper test over a number of weeks or months."

Kelly flagged Giacomo Nizzolo as another rider to watch. The NTT sprinter has been in fine form all year, winning stages at the Tour Down Under and Paris-Nice before lockdown, and then winning both the Italian national road championships and the European road championships.

"Nizzolo is one that I normally wouldn't say was faster than Bennett or Ewan, but confidence-wise he'll be rocketing along because he's on a real good run of form. There are still lots of questions, though, because of the lack of racing."

When it comes to the battle for the green jersey, Kelly can even envisage a GC rider competing for the title – something that hasn't truly happened since probably Laurent Jalabert took the title back in 1995.

"I was hoping that Sagan would be going to the Giro this year, and that was the plan. Then we would have seen more of a battle for the green jersey because in the past few years Sagan has won it comfortably. When you look at the route this year for sprinters, and for Sagan it could be a difficult one, there aren't many chances, so we could even see someone from the GC up there competing for the green jersey.

"It means that the sprinters will have to really go for the intermediate sprints in the race if they want to try to build any sort of advantage. Otherwise, it could be someone who isn't a sprinter at all winning the jersey. We've not really seen the best of Sagan yet this year, but that doesn't mean he couldn't come around after the first few stages and start winning stages – not just the jersey."

One rider who could end Sagan's almost unstoppable run in the competition is Wout van Aert. The Belgian is a better climber and arguably faster in a sprint finish, but his front-line duties at Jumbo-Visma, in theory, will see him work for Primoz Roglic and Tom Dumoulin.

"Van Aert will be interesting to follow, but a lot will come down to how much freedom he's given, and his team duties," agreed Kelly. "If the wind picks up, or there are splits, he might find himself on those duties, and that's going to limit his opportunities. He's capable, though, on the sprints and in the intermediate, undulating stages to pick up points and win stages.

"Someone like [UAE Team Emirates'] Alexander Kristoff will be up there to win a stage, but I can't see him fighting every day to get points, and it's the same with a few more sprinters. I just don't know how many sprinters will get to Paris. If you look at some of the races we've had already, it's been very aggressive, and if the Tour is going to be like that, then it's going to be a very hard fight for the sprinters. Sagan, though, is my favourite for the green jersey," Kelly said.