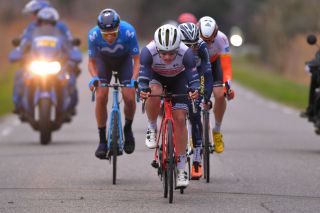 Charlie Quarterman's baptism of fire among the professional elite was going pretty well until he reached a brief ladder of hairpins in today's second stage of the Tour de la Provence. After that, on the rolling hills towards the finish overlooking La Ciotat, the Trek-Segafredo neo-pro found himself alone, fighting for survival.

One day you're the hammer and the next day you're the nail, or so the old cliché goes, but maybe in Quarterman's case, given that he went to the same school as Radiohead's Thom Yorke, it was more a case of Karma Police.

Still clad in the mountains jersey, he crawled across the finish line atop the Route des Cretes, dead last and almost 23 mnutes behind stage winner Aleksandr Vlasov.

The 21 year old from Oxford had proved to be one of the early stars of the Provencal race, only his second professional outing, stating that riding in the break on the road from Chateaurenard to Saintes-Maries-de-la-Mer had been "surprisingly easy," even though it was only his first time in a professional breakaway.

"It was always pushing a bit but it was only in the last hour that we really started to ride hard," he said. The break was caught four kilometres from the finish, but Quarterman admitted that he had started to dream big.

"I was amazed we got so close to a stage win in the end," he said.

"At around 15km to go, when they were struggling to take time back, I did start to believe a little bit but with such a fresh peloton and crosswinds, I knew it would be fast behind."

Despite claiming the polka dot jersey, he knew that he was only a temporary custodian in a race, that on stages two and three, has now turned towards the mountains.

"The plan?" Quarterman laughed, when asked if he could keep the climber's jersey. "The plan is to try and lose 15 kilos, so no dinner and no breakfast. If I can do that, then maybe there's a small chance."

In the end, after failing to lose 15 kilos overnight, his prognosis proved correct. Quarterman was dropped at the foot of the Cote de Mazaugues riding alone among the team cars for the second half of the stage until he finally rode uphill through headwinds to the finish.

"It was pretty brutal," he said after the stage. "A mistake in changing bikes before the start and forgetting to fuel properly left me suffering from the word go. I was just happy to get there in the end."

But despite his lone 80 kilometres, just ahead of the broom wagon, Quarterman said that he "never" contemplated quitting. "I was worried about being outside the time limit but I never wanted to stop."

His trajectory, like that of 18 year old Trek-Segafredo stablemate Quinn Simmons, has been rapid. "I learned a lot at Leopard's continental team. I was getting beaten up a lot in the races, but it helped me see how high the level was and to get used to it."

His career really took flight last year when some eye-catching performances with Holdsworth Zappi culminated in victory in the under-23 time trial at the British National Championships. "It was a bit of a crazy month but it brought about this move," he said. "It all happened really fast and my life changed within six weeks."

"After three tough years with illness and crashes it was unbelievable for everything to come together. I have no idea what to expect, but I am loving it."

Next comes the UAE Tour, then another steep learning curve with a first immersion in the northern Classics. "I don't want to make stupid comments before I realise how hard it really is but anything is possible. Young guys are doing well already and as long as I work hard hopefully one day I'll get there."