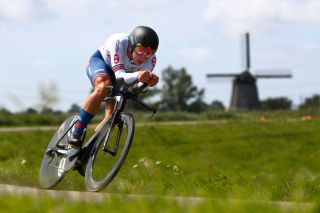 Charlie Quarterman, the British U23 time trial champion, will turn pro in 2020, signing for Trek-Segafredo in a deal that will see him race as a stagiaire for the Italo-American squad for the remainder of 2019.

Quarterman, who turns 21 later this week, has been racing for the Holdsworth-Zappi development team this year, having spent two years with the Leopard team.

He finished third on stage 7 of this year’s U23 Giro d’Italia and fourth in the prologue but his biggest success came with in U23 British time trial championships where he beat Ethan Hayter by 44 seconds.

He has signed a two-year contract with Trek-Segafredo, starting in 2020, but will also have a run-out this autumn as a stagiaire.

“I’m incredibly proud and excited to announce that, for the next two years and for a few races this year, I will be riding for Trek-Segafredo,” Quarterman said in a video statement.

“It’s a massive honour for me to announce this and I can’t quite believe it, to be honest. But I can’t wait to get started with the team and take on some of the biggest opportunities of my life. I know it’s early in my career and it’s a dream come true for me but I’m ready to work hard for me and my teammates.”

Quarterman is the sixth new signing for Trek-Segafredo ahead of the 2020 season.

The headline recruit is Vincenzo Nibali, who joins from Bahrain-Merida along with his brother, Antonio. The team have also signed Alexander Kamp from Riwal readynez and Emils Liepens from Wallonnie-Bruxelles, along with another neo-pro in Juan Pedro Lopez, who has come through their Kometa development set-up.

They are losing John Degenkolb to Lotto Soudal and Markel Irizar to retirement, but have extended the contracts of Giulio Ciccone, Kiel Reijnen, Toms Skujins, Ryan Mullen, and Alex Kirsch.