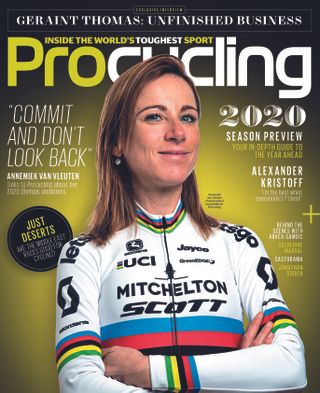 Last year was the best ever in the career of Annemiek van Vleuten, with wins at Strade Bianche, Liège-Bastogne-Liège, the Giro Rosa and her first road race title at the World Championships. Procycling magazine's 2020 season preview features an exclusive interview with the Dutchwoman, as well as a 66-page booklet that looks ahead to the new racing year.

Though she has twice won the world time trial title, 2020 is the first time Van Vleuten will wear the rainbow stripes on the road, with her victory in Yorkshire coming a year after a crash and subsequent knee injury finished her 2018 season. Procycling met with Van Vleuten near her home in the Netherlands and then joined her for a ride around her home roads, where she looked back on the 100-kilometre attack that won her the Worlds, and why she thinks she can still keep improving.

"According to Louis [Delahaije, coach], we haven’t hit the ceiling yet; every year I still get a bit better," Van Vleuten says. "During the climb at the Worlds where I attacked, I recorded my highest ever five-minute power. It’s quite nice when you can pull that off at 36."

From January's Procycling: Alberto Contador and Chris Froome: Clash of the titans

Another rider looking towards the years he has left in his career is Alexander Kristoff. The Norwegian, 32, has trodden the line between sprinter and classics specialist throughout his career but, as he gets older, he’s reflecting more on where his strengths lie and where he fits into the peloton. Edward Pickering went to meet the UAE Emirates rider to find out why he’s most successful at the end of the races when everyone else is suffering.

A new season means new-look teams in the peloton, perhaps none more so than French ProTeam squad Arkea-Samsic, who look transformed this year thanks to a raft of major signings. None come bigger than Nairo Quintana, who moves down a level after spending his career so far at Movistar. The Colombian heads a South American trio who move to the traditionally French team, along with home sprinter Nacer Bouhanni, who’s looking to get his career back on track after a disappointing few seasons at Cofidis. Alasdair Fotheringham spent time with the team to find out if their big ambitions are realistic or too much, too fast.

At the start of this year, Team Ineos confirmed that Geraint Thomas and Egan Bernal will both return to the Tour de France this July. Welshman Thomas won the race in 2018 and finished runner-up to his teammate Bernal last summer and, though he’ll be 34 when the Tour starts in Nice, he feels he has unfinished business with the race. Sophie Hurcom interviewed Thomas about why the Tour matters so much to him.

Despite the Tour of Oman’s recent cancellation for 2020, the Middle East races have been a part of pro cycling’s landscape for 18 years, with the UAE Tour, a new women’s Dubai Tour and Saudi Tour all on the early season calendar. Edward Pickering looks at where the desert races fit into the sport.

Elsewhere, Jon Dibben has pressed the reset button on his WorldTour career this year, joining Lotto Soudal after a year away from the top level of the sport. Once hailed as one of Britain’s brightest young riders, with a world title on the track and major U23 road performances to his name, Dibben turned pro with Sky in 2017 but after two seasons found himself in cycling no-man’s land. He tells Procycling why he’s happy to be starting again at the Belgian team.

The 2020 Olympics in Japan will mark 30 years since the World Championships were also held in the country. Giles Belbin meets Frenchwoman Catherine Marsal, the gold medallist at the women’s road race back in 1990, to recall her rapid rise through cycling, her career-defining victory and the pressure she faced afterwards.

Plus, James Witts explores the truth behind the headlines on ketones, the controversial supplement that’s been rumoured to have been used in the peloton for years, while William Fotheringham takes us back to the days of Castorama in the 1990s in this month’s Retro feature.

The February issue also features all our regulars, plus introduces our new diarists for 2020 - James Knox, Heidi Franz and Roger Kluge - while Dan Martin also returns. On top of that, Procycling also has a new regular contributor in Laurens ten Dam, who will be writing our new Last Word column each month.

Procycling magazine: the best writing and photography from inside the world’s toughest sport. Pick up your copy in all good newsagents and supermarkets now, or pick up a Procycling subscription.