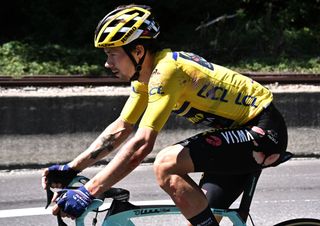 Primož Roglič’s ability to fight for overall victory at the Tour de France after his crash at the Critérium du Dauphiné is still in doubt, with conflicting reports about his health and recovery. His partner Lora Klinc has gone as far as to suggest a final decision has still not been made on whether he will take the start in Nice on Saturday.

Roglič abandoned the Dauphiné ahead of the final mountain stage after crashing hard the day before. He hurt his hip and suffered lots of road rash but Jumbo-Visma team manager Richard Plugge said he did not suffer a concussion.

Roglič stayed in Tignes in the French Alps with the Jumbo-Visma team and last Thursday posted a photo of himself on the home trainer, saying: "I honestly thought that I would feel better by now after the crash on Saturday at the Critérium du Dauphiné. Let's see what the upcoming days bring. I'm staying optimistic."

His partner Lora was less optimistic during the presentation of her book about Roglič in Slovenian on Monday evening.

“The crash put everything on hold for a while,” she told RTV Slo.

“The most important question at the moment is whether Primož will really start. We all want that, but we are waiting for confirmation… I’m anxiously waiting for what will happen.”

According to reports in Spain, Roglič also told RTV Slo that he was not even sure if he would be able to start the Tour.

The Jumbo-Visma team played down the reports and reiterated to Cyclingnews that Roglič would take his place in the team eight-rider roster. However, doubts remain about Roglič’s health and fitness after suffering such a hard crash so close to the start of the Tour de France and spending time off the bike.

According to reports in the Netherlands, Roglič has recently returned to full training and is expected to study the hugely important 17th stage mountain finish on the Col de la Loze today.

“Lora was with Primož last week on Monday and Tuesday and he was not quite back to his best,” Zeeman reportedly told AD. “As soon as training became serious again, he participated in everything. Thanks to the good work of our medical staff, he can train fully.”

Zeeman explained that Roglič will remain at altitude until Wednesday, while Dumoulin has already descended to Nice for the Grand Départ of the Tour de France.

“Every rider has his own plan for an altitude training camp,” Zeeman explained. “The experience we’ve had with Primož is that it’s best for him to stay at altitude for as long as possible.”