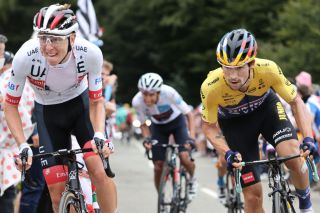 Primož Roglič might be leading the Tour de France but the Jumbo-Visma all-rounder isn’t getting carried away with the situation and is well aware that his slender lead over his key rivals is no guarantee for overall victory with the key Alpine stages still to come.

Roglič already has a stage win to his name in this year’s race and goes into the second week of racing with a 21-second lead over defending champion Egan Bernal (Ineos Grenadiers). Five more riders sit within 45 seconds of the maillot jaune, the most dangerous perhaps being Tadej Pogačar (UAE Team Emirates), who won stage 9 and looks to be at least on par with Roglič in terms of climbing ability at this point in the race.

“It’s our goal to have yellow in Paris, but with our performance and the way of racing we’ve showed as a team we actually deserve it right now. I’m really happy and proud to be wearing the yellow jersey,” a relaxed Roglič told the media on the first rest day of the Tour.

“There are still some stages to come in front of us. With all the guys we’re super motivated for the days to come but it’s still just the start of the Tour. More things will happen, especially with the start of this week and then we’ll finalise the whole picture in the third week after the time trial at La Planche des Belles Filles,” Roglič said.

The 36km time trial on stage 20 is still almost a fortnight away and almost every stage between now and the final individual test is a possible day for the GC contenders. And as Roglič knows, the race can change in the blink of an eye.

The Jumbo-Visma leader crashed while leading the Critérium du Dauphiné last month and was forced to abandon the next day. The injuries from his fall almost took him out of the Tour even before the race began, with the Slovenian admitting that he only made the final call to head to Nice a few days before the Grand Départ.

“The crash in the Dauphiné wasn’t the way that I planned things coming into the Tour because I had a lot of pain. After a few days it’s normally okay but I had to make a last-minute decision, last Tuesday, that I would go to the Tour. I was then confident entering the Tour, that, sure with some luck, I could come through the first few days, but it’s getting better and everything has gone perfectly,” Roglič said.

Jumbo-Visma have been the dominant team in this year’s race, even after Tom Dumoulin sacrificed his chances for Roglič’s cause, and the race leader was at pains to stress that a Tour win was a collective effort. At the same time, Pogačar’s performances in the Pyrenees showed that this race is far from over, and while rivals have dropped out of contention, there are still plenty of threats facing Jumbo-Visma.

“As a team we talked about our roles from the winter onwards and we all want to do our part in achieving the yellow jersey. It’s not just on me or Tom, or the other guys or the coaches,” Roglič continued.

“For sure we’ll do our best to defend the yellow jersey but the main thing is about focus, concentration, staying healthy and doing our work. The most important thing is to focus on tasks each day, maybe it will be a bigger challenge now that we have the jersey.”

After losing time in the crosswinds on stage 7, Pogačar’s GC charge is looming large on the horizon. He was the strongest climber in the Pyrenees and has dragged himself back into contention. Roglič had the better of his compatriot during last year’s Vuelta a España but a year on from that encounter this could be a much closer affair.

“In the Pyrenees he was one of the strongest guys. When he went alone no one could really follow him and then on the second day that he won he was also really strong," Roglič said about is fellow countryman Pogačar.

"For me it’s still beautiful to see two guys from Slovenia riding their bikes hard here in France. It’s crazy to have a nation of two million people and then the two best riders in the world. He’s a super nice guy but that doesn’t mean we say ‘today you win, today I win.’ There’s just big respect.”