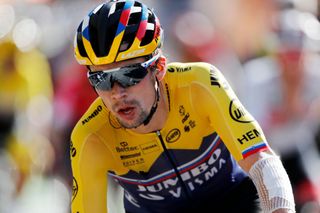 The Tour de France hadn't visited Orcières-Merlette for over three decades, but there was a definite air of déjà vu about Primož Roglič's stage win on Tuesday ahead of a small group of overall favourites.

For most of the climb, Deceuninck-QuickStep rather than Jumbo-Visma made the pace-setting. But then, just as at the Critérium du Dauphiné three weeks ago, a last-kilometre acceleration by the Dutch team's top out-and-out climber Sepp Kuss left Roglič poised to pounce for the stage victory - and pounce he duly did.

The Slovenian was able to put a good couple of bike lengths between himself and his rivals, despite the climb being a relatively straightforward one.

In the process, while Roglič has all but definitively buried any questions about whether he has recovered from his Dauphiné injuries, it also raises another – how much damage will he be able to inflict on the much tougher summit finish of Mont Aigoual on Thursday?

Roglič was happy to discuss his latest display of climbing strength, which allowed him to soar 12 places on the overall classification to third, just seven seconds behind race leader Julian Alaphilippe (Deceuninck-QuickStep).

"It was quite a fast day, and hard," Roglič observed, "but the team did a really good job and all the time I was in a good position and I did a good sprint.

"I didn't get the yellow jersey, and I have to accept that, but I wanted to stay safe, too, and win the stage."

There had been mixed signals before the Tour de France as to Roglič's underlying state of form after his Dauphiné crash and abandon - and the bandage he was wearing on his arm as recently as last weekend seemed to confirm he was not, yet, in a great place. However, all that seemed to be consigned to the past on Tuesday, with Roglič saying that "it's nice to be riding the bike [well] again. I already saw on stage 2" – the first major mountain stage of the Tour – "that I was ready."

In terms of how he will be looking at the rest of the race, and in particular, how he plans to play a two-hander with Tom Dumoulin as Jumbo-Visma's other GC leader, Roglič did not feel that there needed to be any change to the Dutch squad's current strategy.

"We need to continue in the way that we already started," he insisted. "And both of us need to stay up there for as long as possible." As for his teammate Wout Van Aert, who put in a massive amount of spadework on the lower slopes of Orcières-Merlette, Roglič was fulsome in his praise, saying "he's always there, and it's a pleasure for us to have him in the team. The rest were all suffering a lot.

"I just feel proud because all the guys did a great job and I could finish it off."

He was far more circumspect when asked about whether he was surprised that Ineos Grenadiers were not present in force at the summit of the climb, resolving the somewhat loaded question with an utterly ambiguous "yes and no, but that doesn't change much.

"For sure Ineos will show themselves later in the race," he argued, before complimenting both Alaphilippe and Thibaut Pinot (Groupama-FDJ) as dangerous rivals.

Roglič seemed equally bent on muddying the waters when asked if he wanted the yellow jersey as well as the stage win, answering "yeah, no" before sidestepping the issue by saying that Deceuninck-QuickStep were also on the hunt for some good results.

But in either case, the main news of the day was not so much whether Roglič is yet in yellow, but rather what he did on Tuesday was make a major statement of climbing intent, one that forebodes anything but well for his rivals and which shows that if he was ever in danger of drifting out of the game, that trend has now come to an abrupt halt.