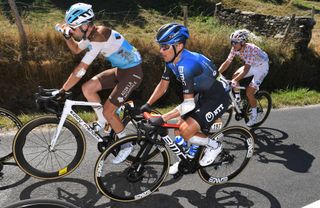 NTT’s Domenico Pozzovivo has struggled at the 2020 Tour de France with an elbow injury sustained in a crash on the opening stage of the race (Image credit: Getty Images Sport)

NTT Pro Cycling's Domenico Pozzovivo has quit the Tour de France following the conclusion of stage 9 in Laruns on Sunday, having battled through the opening week with an elbow injury sustained in the large crash that brought down a number of riders three kilometres from the finish in Nice on the opening stage of the race.

Pozzovivo – who was in 45th position overall, almost 50 minutes down on new race leader Primož Roglič (Jumbo-Visma) – says that he'll now be able to fully recover, and hopes to be able to instead target the rescheduled Giro d'Italia in October. The 37-year-old has finished in the top 10 at the Giro five times since 2008, and was fifth in both 2014 and 2018.

"I didn't want to leave the Tour without seeing if my body could recover during the course of the race, but the pain every day has been incredible," Pozzovivo said in a press release on Sunday. "Added to that is the risk of crashing again and causing even greater harm, which is simply too great.

"I'm going to focus now on recovering as quickly as possible, and then look towards my next goal, which will hopefully be the Giro d'Italia," the Italian said.

"I've tried to give my absolute best, and have had incredible support from my team here, for which I want to thank everyone involved," Pozzovivo said. "I wish them all the very best for the rest of the race."

Teammate and compatriot Giacomo Nizzolo was also involved in the same crash in Nice, and was forced to quit the race on stage 8 on Saturday.

"It's really disappointing that Domenico has been forced to pull out of the race," said NTT team manager Bjarne Riis. "We were very optimistic that he would be able to feature in the overall general classification, but that opportunity was taken away from him on the first stage by the crash.

"I've seen how he's been bravely suffering every day, and we've now come to the conclusion that the best thing is for him to stop," said Riis, who the team said ultimately made the decision. "We want him to return home, focus on recovering and start looking ahead to preparing himself for the Giro d'Italia.

"It's been so encouraging to see how he prepared himself to be ready for the Tour de France after the way in which he recovered from his serious crash last year, so for his race to end in this way is very sad," he said.

Pozzovivo was hit by a car while training in Italy last August, suffering a broken arm and leg, which he at first feared might end his career, although he fought back to race again at the Tour de la Provence in February, having moved from Bahrain Merida to NTT for the 2020 season.