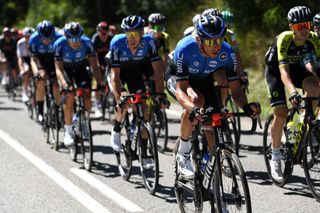 The future of NTT Pro Cycling is apparently under threat after reports emerged that the WorldTour team is searching for sponsorship for 2021 onwards.

After a rebrand and switch from Dimension Data to parent company NTT for this season, the team's contract with the IT company is up at the end of the year, and no replacement or extension is forthcoming, according to a report by Wielerflits.

Back in April, the team was reportedly attempting to extend the sponsorship contact with NTT, while Danish window brand Velux was rumoured as a potential title sponsor after Dane Bjarne Riis joined the team as general manager at the start of 2020.

Riis and his partner at Virtu Cycling Lars Seier Christensen had reportedly taken part-ownership of the team at the time, snapping up a third of the shares from team owner Douglas Ryder. However, months later, that deal has not yet happened and is now unlikely to come to fruition.

Ryder still owns 100 per cent of the team, with a "letter of intent" from Riis and Seier Christensen never translating to a full deal, reported well-informed Danish newspaper Ekstra Bladet.

In June, Riis stated that it was still the intention to take part-ownership of the team, adding that the COVID-19 pandemic – which saw the team cut salaries – had complicated matters.

"We still have to work out exactly which direction the team is headed in, and it's been difficult under the circumstances we've had in recent months," Riis said. "Now we're going to have a meeting so we can get everything in place."

Only a handful of NTT's riders are under contact beyond this season, the five men including Domenico Pozzovivo, Victor Campenerts and neo-pros Matteo Sobrero, Dylan Sunderland and Samuele Battistella. The team's out-of-contract riders have reportedly started to look elsewhere, with just four months to go until the 2021 season gets under way.

The team has won seven races in the 2020 season, already matching their win total from the past two seasons. Giacomo Nizzolo has taken stage wins at the Tour Down Under and Paris-Nice, also taking the Italian road race and European road race titles.

When questioned by Cyclingnews on the future of the team, NTT stated that they are currently focussed on the Tour de France.