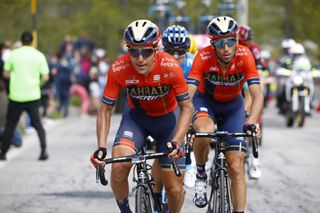 The NTT Pro Cycling team has confirmed that Domenico Pozzovivo will join the team for 2020 after recovering from a career threatening car strike in Italy that left him with multiple fractures in his leg, upper and lower arms and collarbone.

The 37-year-old Italian climber has worked hard during an extensive period of rehabilitation and recently completed a block of warm-weather training in Gran Canaria.

He still faces surgery to remove a kilo a titanium plates and screws that were used to help heal his fractures but riding the Giro d'Italia with NTT Pro Cycling is the first major goal of the 2020 season.

"If I didn’t think I'd be able to race again, I wouldn't have the fuel to drive my recovery," La Gazzetta dello Sport reported Pozzovivo as saying on Monday.

Pozzovivo rode for Bahrain-Merida in 2019 and finished second overall at the Tour of Oman and rode the Giro d'Italia in support of Vincenzo Nibali. He has ridden 18 Grand Tours, securing seven top ten placings. Pozzovivo has recovered from two serious injuries in the past – first breaking his tibia and fibula on the Stelvio in 2014, and then suffering a head injury after a heavy fall at the 2015 Giro d'Italia.

He was due to ride the 2019 Vuelta a España but was hit by a car while training near Cosenza in southern Italy, leaving him with a triple fracture in his left arm and a fractured tibia and perone in his right leg.

"I would like to thank Douglas Ryder and the management of NTT Pro Cycling to accept the challenge of allowing me to return to my usual high level of cycling," Pozzovivo said via NTT Pro Cycling.

"Already, since the long period of hospitalization and then with a hard physiotherapy job, I started to work tenaciously on my recovery. My healing will continue in the next months and I’m confident that together with the team we will win this bet. I can’t wait to meet my teammates and the staff at the next training camp and then to come back to the races."

"We are very happy to have Domenico choose to ride for NTT Pro Cycling for the foreseeable future," team manager Doug Ryder said.

"We needed a climbing specialist with GC aspirations to complement the team we have assembled for 2020. Domenico has been so consistent over the years, his experience will add huge value to the younger climbers in our team, and the true grit he has shown since his accident proves his passion and commitment to his own career and the sport of cycling. We look forward to the contribution he can make."