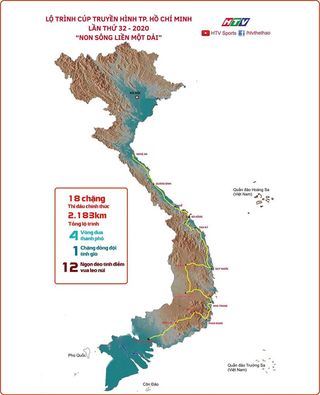 Competitive cycling will resume next week in the country that hasn't recorded any deaths from the COVID-19 virus, and has had just 288 confirmed cases: Vietnam. The HTV Cup features 18 stages – just as many as this year's postponed Vuelta a España – and runs from May 19 to June 7.

Missing Vincenzo Nibali and the fight for pink? Cycling fans will soon have an alternative to the Giro d’Italia, and can cheer for the likes of Luong Van Sinh from the Hanoi Team as the Trinh Cup Truyen Hinh TP Ho Chi Minh Lan Tu 32 – commonly known as the HTV Cup – will be broadcast live on Facebook and YouTube. It will be the 32nd edition of the oldest and most famous stage race held in Vietnam.

The event, organised by Ho Chi Minh TV, was scheduled for April but was postponed due to the coronavirus outbreak. UCI-sanctioned events are suspended until July 1, but although cycling has been a very popular sport in Vietnam – a country of almost 100 million people – since the French colonial times (1887-1954), none of their races are part of the UCI calendar. The last one that was was the ADC Tour of Vietnam in 2012.

Even though Vietnam has a 1,300km long border with China, the country has managed to contain the propagation of COVID-19 based on the experience of SARS in 2003.

"Everything is fine here now and our race will be the first sporting event in Vietnam after COVID-19," journalist and organising committee member Duc Phat Nguyen informed Cyclingnews. "The riders will not have to wear a mask, but staff members, cameramen, referees, motorbike drivers, etc. will do, as well as washing their hands regularly."

Foreigners aren't yet permitted to enter Vietnam so the start list of 84 riders comprises Vietnamese nationals only, with the exception of defending champion Javier Sardá Pérez from Spain, who rides for Thanh Phô Ho Chi Minh, and Frenchman Loïc Desriac of Bikelife Dong Nai, who migrated after marrying a Vietnamese woman at the time he was racing professionally for Roubaix-Lille Métropole (2011-2013).

"I normally spend eight months a year in Vietnam, and I go back to Spain when I don't have any races here," said Sardá, 31, who hails from Zamora in Castilla y León.

"I arrived in Ho Chi Minh City in February before the outbreak. I live here as a professional cyclist, and have trained very well these past few months with the goal of winning the HTV Cup again. This is the most important race for my team," he said.

"The event is very well covered by the newspapers," Desriac echoed. "The criteriums are live on TV, while other stages have 15-minute highlights every evening. Every day it's live on Facebook and YouTube. Usually, the race celebrates the reunification of the country [in 1976]. This year it starts on May 19 as it's the birthday of Ho Chi Minh [the Vietnamese revolutionary leader born on that day in 1890]."

Twelve teams of seven riders each will form the peloton, which is set to cover 2,183km from the north of the country to Ho Chi Minh City in the south. Besides Sardá and Desriac, race favourites are Sardá's Thanh Phô Ho Chi Minh teammates Le Nguyet Minh and Nguyen Truong Tai, Dong Thap's Phan Hoang Thai and Nguyen Tan Hoai, Trinh Duc Tam and Le Ngoc Son (both An Giang), and, of course, Luong Van Sinh, 23, who rides for the team of the country's capital, Hanoi, but hails from the mountains near the border with Thailand and speaks three languages: Thai, Hmong and Viet.