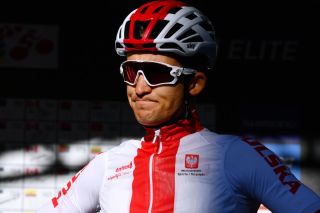 Michał Kwiatkowski (Team Ineos) has opted to skip the UCI Road World Championships in Yorkshire. The 2014 world champion has not been named in Poland’s six-man team for elite road race, with the 29-year-old saying that he needs to take a break from racing.

The Polish Cycling Federation presented the composition of the national team on Monday evening, with Rafał Majka (Bora-Hansgrohe) and Katarzyna Niewiadoma (Canyon-SRAM) the likely leaders for the men's and women's teams.

Majka, the country’s best Grand Tour rider – fresh off sixth at the Vuelta a España, has been selected alongside his two Bora-Hansgrohe teammates Maciej Bodnar and Paweł Poljański. Michał Gołaś (Team Ineos), Łukasz Wiśniowski and Łukasz Owsian (CCC Team) round out the men's team.

Kwiatkowski is the most notable absentee. The hilly parcours of Yorkshire route seems to favour a Classics-specialist, a puncheur able to launch a timely attack or win a sprint from a reduced group after 250 kilometres of racing – perfect for a rider like the Pole.

However Kwiatkowski has struggled in recent months, first lacking form at the Tour de France and in recent weeks struggling at Deutschland Tour and Canadian one-day races, the Grands Prix de Québec and Montréal.

"I feel nothing but respect for these colours and the Polish eagle on the jersey, hence I will not ride 2019 Worlds," he wrote on Twitter on Tuesday morning.

"I said after Tour de France that my body was screaming for a break. Since then, I’m not chasing the results. I really needed this. I will keep my fingers crossed for Polish team"

I feel to much respect for this jersey and Polish eagle to start in UCI Worlds 2019. After @LeTour I said, that my body called for a break. A real one. Since then I’ve not been chasing any results. I truly needed that. I will keep my fingers crossed for 🇵🇱 team at #Yorkshire2019. pic.twitter.com/oKaA4EhytxSeptember 17, 2019

Meanwhile, Majka is set to continue his already long season.

The 30-year-old finished sixth in Vuelta a España on Sunday and already raced 73 days, having secured sixth place in Giro d’Italia earlier this year. The course in Yorkshire does not suit the Grand Tour climber but in absence of Kwiatkowski, he seems the only choice available to national team sports director, Piotr Wadecki.

While the 60kg climber has only occasionally rode one-day races and is not fond of the autumn weather, he previously managed third and seventh at Il Lombardia (2013 and 2018), as well as 10th in Liege-Bastogne-Liege (2017), not to mention an Olympic bronze medal at Rio 2016.

Bodnar and Kamil Gradek (CCC Team) will be the first elite men riders to show off national colours as they are both scheduled for the 54km individual time-trial. The Bora-Hansgrohe powerhouse only raced 57 days this year and has not made appearances in any of the Grand Tours, as a result focusing solely on the Yorkshire course.

Poland will be eyeing a result in elite women’s road race in which Niewiadoma and Małgorzata Jasińska (Movistar) are expected to share leadership duties. Winner at Amstel Gold Race, Niewiadoma fancies her chances on a hilly course in Yorkshire, while Jasińska is prepared for an aggressive race, a strategy that gave her fifth place last year.

Niewiadoma has been consistently among the best riders in spring classics and stage races, winning Amstel Gold Race and a stage of OVO Energy Women’s Tour this season. She placed sixth in Trofeo Alfredo Binda, Liège-Bastogne-Liège Femmes, La Flèche Wallonne Feminine and the Tour of Flanders, and finished third in Strade Bianche.

Later in the season, the 24-year-old also claimed second at the Women’s Tour, fifth in both Giro Rosa and Women’s Tour of California, and fourth in recent Ladies Tour of Norway. The punchy climbs in Harrogate should suit her aggressive racing style but with the Dutch squad set to dominate racing for rainbow, she will rely on Jasińska, Trek-Segafredo’s Anna Plichta and CCC-Liv’s Marta Lach to respond to tactical manoeuvres and cover the moves.

Plichta is also set to ride the elite women time trial, aiming for a top-ten finish after an encouraging fifth in a 9km race against the clock at Madrid Challenge.