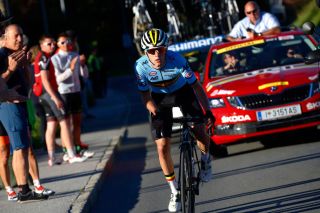 Belgium has confirmed its finalised rosters for the upcoming UCI World Championships in Yorkshire. The squad will have two clear leaders in Harrogate, with Philippe Gilbert (Deceuninck-QuickStep), Greg Van Avermaet (CCC Team) , while 19-year-old Remco Evenepoel a real contender for the elite men's time trial and perhaps an outsider for the elite men's road race on September 29.

There are no real surprises in the eight-rider team, though Jasper Stuyven (Trek-Segafredo) could feel snubbed after his strong run of form through August and September. He's on the reserve list, along with Laurens De Plus (Jumbo-Visma), Laurens De Vreese (Astana) and Sep Vanmarcke (EF Education First).

Van Avermaet is perhaps best-suited to the course, with the possibility of a reduced bunch sprint in Harrogate.

The 34-year-old didn't have the best opening half to 2019, winning a stage at the Vuelta a Valenciana and the Tour de Yorkshire but missing out at the Tour de France. However, he showed that he'll be ready to go in Yorkshire, with third at the GP Québec and the win in Montréal.

Gilbert will be one of the main contenders to take the rainbow jersey, with the Lotto Soudal-bound 37-year-old keen to repeat his 2012 World success.

Evenepoel will be taking on the senior Worlds for the first time, skipping the under-23 category altogether after taking both the road race and time trial junior titles in Innsbruck last year. He'll be paired with Hour Record holder Victor Campenaerts (Lotto Soudal) in the men's time trial.