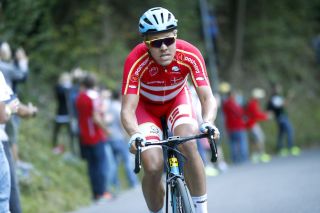 Astana's Jakob Fuglsang and Dimension Data's Michael Valgren will lead Denmark's elite men's squad for the World Championships road race on September 29, and could prove to be two of the danger men over the long, tough course in Yorkshire.

Fuglsang out of Tour de France after stage 16 crash

Fuglsang at Vuelta a Espana with an eye to Yorkshire Worlds

Fuglsang has enjoyed one of his best seasons yet, despite crashing out of the Tour de France, and recently showed a return to form with a stage win at the Vuelta a España, to add to the victory he took at Liège-Bastogne-Liège and the overall title at the Critérium du Dauphiné he won earlier this year.

Valgren hasn't had the best season since joining Dimension Data from Astana for 2019, but was one of the main protagonists in the finale of last year's Worlds road race in Innsbruck, Austria, and could prove dangerous again late in the race at the end of this month.

Deceuninck-QuickStep's Kasper Asgreen has also enjoyed a phenomenal first full season in the WorldTour peloton, finishing second at the Tour of Flanders, winning a stage at the Tour of California, and winning the Danish time trial championship ahead of working hard for his trade team in what was this year his first Tour de France.

He went on to finish second at the European time trial championships, and then won a stage at the Deutschland Tour late last month.

As well as riding the Worlds road race, Asgreen will race the individual trial on September 25, along with BHS-Almeborg Bornholm's Martin Toft Madsen.

Astana's Magnus Cort – a stage winner at the 2018 Tour de France – will be another strong arrow in the Danish team's quiver, as will national road race champion Michael Mørkøv. While Mørkøv is most often used by Deceuninck-QuickStep in sprint-lead-out trains for the likes of Elia Viviani, he could find himself sprinting for a rainbow jersey should the race come down to any kind of reduced-bunch sprint.

The nature of the 284.5-kilometre course, however, points to an attritional-style race where only a select few riders will still be in the mix to contest the medals, and Denmark's elite men's national coach, Anders Lund, feels that one or more members of his team are in with a good chance of being there at the finish.

"We have a very strong team, which has real strength in depth, and so I expect us to be competitive," Lund said on the Danish cycling federation's (DCU) website. "It's a tough route, but more because of how technical it is, rather than in terms of altitude, and that suits us."

The rest of the eight-man Danish team is made up of Mitchelton-Scott's Christopher Juul-Jensen, Casper Pedersen (Sunweb) and Trek-Segafredo's Mads Pedersen.

"We have riders who are capable of being there for the key moments of the race, and so we have to take advantage of the fact that we have so many cards to play," Lund said.

"There are no really tough climbs on the final circuit, but 180 km will have been covered by that point, with 100km still to go, and that's when our riders will come into their own," he added.

Fuglsang has come out of the Vuelta with a first Grand Tour stage win to his name, and will be looking to take that form into the Worlds road race, while Valgren's route to the Worlds has been via the one-day WorldTour races in Canada, where he took fifth place in the GP Cycliste de Montreal on Sunday.

"It was a super long race, with two more laps than in past years. It was quite relaxed at the start, but started to get harder as we neared the end. In the end, I had really good legs, so I was able to stay with the best riders on the climb," Valgren, who won both Het Nieuwsblad and Amstel Gold in 2018, said of the race in Montreal on his Dimension Data team's website.

"I also wanted to put in a strong performance for Rolf [Aldag], as he is one of the main reasons I joined this team last year," he admitted, referring to the outgoing performance manager, who will leave at the end of this season after four years with the WorldTour team.

"But my legs feel good, so this has improved my confidence ahead of the Worlds," said Valgren.