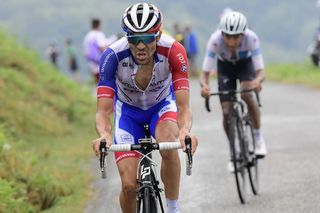 Groupama-FDJ's Thibaut Pinot has made the decision not to race again in 2019, preferring to forego attempting to defend his Il Lombardia crown in favour of preparing as well as he can to hit the ground running next season.

As such, Pinot has not been named in the French selection for the UCI Road World Championships in Yorkshire later this month, with the team for the elite men's road race having been built exclusively around Deceuninck-QuickStep's Julian Alaphilippe.

Pinot enjoyed an incredibly successful end to his 2018 season, winning Il Lombardia and Milano-Torino, and finishing sixth overall – and winning two stages – at the Vuelta a España ahead of a top-10 finish at the Worlds road race.

Pinot's thigh injury sustained at the Tour de France this July, which saw him quit the race in tears while in pole position to potentially win La Grande Boucle overall, and become the first Frenchman to do so since Bernard Hinault in 1985, was the turning point of his season. And although he's now recovered from that, and has continued to train, Pinot has decided that it's best to cut his losses and simply try to come back even stronger in 2020.

"I've just felt exhausted. After the Tour de France, I stopped riding for three weeks, and that forced rest hasn't exactly left me at 100 per cent for the rest of the season," Pinot admitted on his team's website.

"That includes my condition for Il Lombardia, where I would have wanted to try to defend my title and be able to be up there fighting it out with the best riders. My current condition simply wouldn't have allowed me to be competitive enough.

"However, I'm already thinking about 2020, which will be a very important season for me," Pinot continued. "I'm already setting new goals, and want to get back to my best level as soon as possible. To do that, I'll continue to train hard until the end of September so that I go into the winter break already in decent physical condition."

Groupama-FDJ manager Marc Madiot added that he and the rest of the team were fully on board with Pinot's decision to end his season early.

"It would have been too risky to try to get everything back on track with the sole ambition of going all-in for a single day of racing at Il Lombardia," Madiot said.

"Nevertheless, Thibaut has obviously resumed training and will complete his training programme before starting his winter break. And, of course, we'll still go into our end-of-season with the desire to shine and obtain results through Arnaud Démare and Marc Sarreau.

"We'll also give more responsibility to David Gaudu and Valentin Madouas at the Italian races. This is a real opportunity for those two young riders to learn."