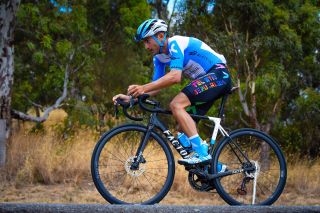 James Piccoli should have already been days into his first Grand Tour in his debut season with Israel Start-Up Nation this week were it not for the COVID-19 coronavirus pandemic. Instead, he's been logging kilometres inside his tiny apartment in Montréal on Zwift - his victory on stage 3 of Zwift Tour for All evidence that he's taking his job seriously - in addition to training outdoors.

Cyclingnews spoke to the Canadian after the five-stage virtual race finished up as a rare May snow fell outside his door.

Piccoli discovered that racing on a home trainer is as intense if not more than the real thing after going just a bit too early in the final kilometre of stage 5 on the Alpe du Zwift. He finished sixth behind Louis Meintjes after winning stage 3.

"I don't train with a heart rate monitor outside so I don't have a point of reference, but I saw numbers five beats higher per minute than what I thought was my maximum heart rate," he jokes.

"It was quite a shock to the system but Zwift has been a great way to stay motivated and it was a lot of fun."

Piccoli competed in the virtual races on a trainer set up outside the kitchen, with two laptops - one connected to his TV running Zwift and a second one for the live television video feed - his phone pinging with texts from two virtual director sportifs and his front door wide open and a fan blowing despite the cold temperatures. "The neighbour walks the dog every day and looked in and saw me - they must have thought I was crazy," Piccoli says.

If letting the door swing wide open while it's snowing wasn't enough for his fellow citizens to question his sanity, Piccoli also rode up Mont-Royal - the signature climb of the GP de Montréal WorldTour race - 100 times over 14 hours last week as part of a fundraiser to support organisations on the front line of the COVID-19 crisis.

His group raised over $20,000 but the ride itself also earned Piccoli a lot of support.

"I started with the idea of a 12-hour shift to pay homage to healthcare workers - then we got so many donations I decided to go for a little overtime like our doctors and nurses often do. I settled in on 100 reps - it took 14 hours and 40 minutes, by far the longest ride I've ever done."

Piccoli parked a car packed with food and drinks at the base of the climb and stopped every 10-15 laps for a break, but there was some extra motivation, too - his mother brought cookies and some friends brought pizza - and luckily, the weather cooperated for his efforts, with a fine 18-degree sunny spring day bringing out numerous supporters.

"It didn't hurt it was the nicest day in Montréal after a hard winter. Everyone was out on bikes - families, kids, recreational cyclists. I had a lot of friends who came and rode laps with me. There were a lot of people who had heard about it and there was a lot of interest so it made the time go by really fast."

The charity effort was also a way to show himself to his Israel Start-Up Nation team that he had only begun to get acquainted with during an abbreviated season that also happens to be a contract year.

Piccoli, 28, came to the sport relatively late in life, nearly quitting before being picked up by the Elevate-KHS team in 2017, but has impressed with his focus, drive and his power numbers.

Last year, his second places in the Tour du Taiwan, Joe Martin Stage Race, Tour de Beauce and Tour of Utah plus a victory in the Tour of the Gila over Oscar Sevilla paved the way for his first WorldTour bid with Israel Start-Up Nation.

He was down to race the Giro d'Italia after starting the season at Tour Down Under, Cadel Evans Great Ocean Road Race and the Herald Sun Tour but his race programme is now up in the air with the UCI's compressed WorldTour from August to November still full of uncertainty.

"I usually get better as the year goes along and was aiming to go to Australia with decent form and then do Volta a Catalunya, Pais Vasco and then the Giro was my main focus," Piccoli says.

Now he's waiting for the team to untangle the logistical mess of scheduling triple and even quadruple programmes before he knows which races he will target.

"There is a lot to figure out and a lot of overlap, and still a lot of unknowns - what countries will have which travel restrictions, etc. I'm understanding of that and I'll be ready regardless. I've been training well - we're lucky to be able to ride outside in Canada - so I'm just staying focused on being ready for August 1. But there are so many variables that any plans are likely to change."

With only a one-year contract, Piccoli is also hoping to impress with his dedication and build a reputation for being a team player. He made his way onto the team by impressing the squad's performance director Paulo Saldanha, a fellow Canadian who runs the PowerWatts training studios in Montréal.

Putting up solid power values, Piccoli says, is not his problem - he needs experience in races at the WorldTour level. Until racing resumes he's keeping in touch with his teammates and showing his best qualities.

"I think a lot of fitting in isn't just race results - being a team player, helping when you can. Israel Start-Up Nation has been a really good fit for me. The contracts will be tough to negotiate but if the season goes as planned I hope to renew. I'm still motivated and when it comes time to race, I'll be ready."