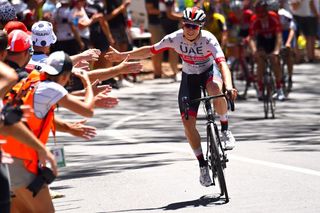 Jasper Philipsen (Belgium) heads into the U23 road race at the Road World Championships as one of the main favourites after a steady start to his life in the WorldTour. However, the 21-year-old believes that even though he has spent the year racing at the top of the sport, he will not have a significant advantage over the majority of his U23 rivals.

"We'll see about my form. My last races were in Canada and those races were pretty hard. I trained well for this race but let's see what’s left in my body after this race," he told Cyclingnews after training on the Yorkshire course on Thursday.

"Everyone thinks that because you've raced with the pros all year then you're five to ten percent better but sadly it's not like this. It will be a high level and I'll need a top day to have a result here."

Philipsen came into the WorldTour this year to huge fanfare. He kicked off his season with a stage win at the Tour Down Under and was given a free run at the entire spring classics campaign by UAE Team Emirates. He also made his Tour de France debut and while other neo-pros have enjoyed more dramatic starts to their careers the rider from Mol has immersed himself in the higher echelons of the sport.

"I've had a lot of opportunities from the team, and a lot of chances. I'm really thankful to the team for allowing me to show my potential. It's been a good season."

The 173km course in Yorkshire will test Philipsen's climbing ability with the undulating and punchy ascents likely to stretch the U23 field to the limits. The Belgian will be looking to survive until the final before unleashing his sprint. He began his season with a win and will be in contention to bookend the campaign with a rainbow jersey.

"My biggest weapon isn't on the climbs but I hope to stay in contention and then survive onto the final circuit. From there anything can happen."

Cyclingnews will have complete live coverage from the men's U23 road race.