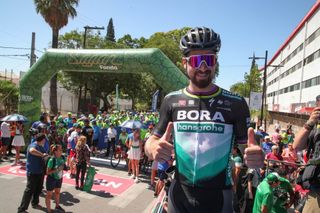 Peter Sagan (Bora-Hansgrohe) has said that it is impossible to fix objectives for the remainder of the 2020 campaign until a revised calendar is decided, but the three-time world champion added that he is willing to race deep into the winter if the coronavirus-interrupted campaign restarts.

Sagan began his 2020 season at the Vuelta a San Juan in Argentina and then trained at altitude in Colombia before making his European debut at Paris-Nice. The Race to the Sun was the final event to take place before the COVID-19 pandemic forced the suspension of the season and Sagan has spent the intervening period in lockdown at his home in Monaco.

In an interview with Il Corriere della Sera, Sagan admitted that the days in isolation had been passing "slowly" but he was glad of the chance to spend time with his young son, who lives nearby.

Peter Sagan: I'm a real cyclist, not a virtual one

"I’ve been in lockdown for almost two months now and it’s become normal to do what I never used to do: grocery shopping," Sagan joked.

"But those who know me know that I always try to see the positive side of things. The best part of this period is being able to spend some time with Marlon every day. I’m happy."

Monaco has imposed similar lockdown and social distancing measures to France, which has compelled professional riders based in the principality to train indoors on their turbo trainers.

"I hate them [turbo trainers] but in this period I have to do it well," said Sagan, who will at least be able to resume outdoor training rides from May 11, even if it is as yet unclear when – or whether – competition will restart in 2020.

"I hear talk of a Tour behind closed doors and an overlap between the Giro and Vuelta, but they’re hypotheses because nobody knows how the virus will behave in the coming months. I hope that when we restart, we will all have the same amount of the time to train and get ourselves ready. My only certainties are that I will be able to leave the house from May 3 and go outside Monaco from May 11."

Sagan had originally planned to make his Giro d’Italia debut in 2020 before riding the Tour de France and then effectively ending his season after competing in the road race at the Tokyo Olympics.

The postponement of the Olympics to 2021 and the ongoing uncertainty over the structure of the calendar means that he has not yet devised a hypothetical racing programme for the Autumn, should the season resume. The Slovakian compared his current state of form with his usual condition in November.

"I’ll only be able to make a programme and decide on my targets when I have certainty over the dates of the Grand Tours," Sagan said. "One target will certainly be Milan-San Remo, which I have never won."

Although the UCI has delayed outlining its revised slate of racing for the Autumn, it has confirmed that the cycling season will be extended into November to allow postponed races to be held. Asked if he would be willing to race until Christmas to recoup the lost races, Sagan said: "That would be fine with me. I’m resting enough."

The hiatus from racing has seen a number of WorldTour teams impose salary cuts and reduce staff due a shortfall in sponsorship revenue, but Bora reiterated its backing of Sagan’s team on Friday when it confirmed that it will continue to sponsor the squad as per the terms of the contract.

"We want to set an example. Even at a time like this, we think that we should still honour our agreement. We will stay fully committed to the team," said Bora Lüftungstechnik CEO Willi Bruckbauer.

"We’ve had outstanding media value over the last few years from our sponsorship activities, boosting Bora’s commercial success. That is why we are staying the team’s reliable partner in these challenging circumstances and helping the riders to prepare as best as possible for the new, shorter race calendar.

"We are also continuing our commitment as we are hoping for exceptional ratings in this exceptional year, and by the same token, we are continuing to place accompanying TV adverts. Investing in the future like this should also help us to secure jobs."

Bora’s announcement comes even though the company, which manufactures cooking extractors, has had to reduce some of its employees’ working hours during the coronavirus pandemic. Bruckbauer said it was his company’s intention to restore full employment shortly.