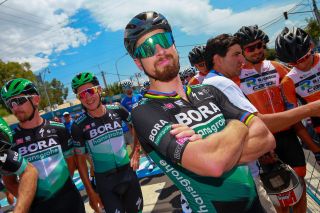 Peter Sagan (Bora-Hansgrohe) has dismissed the idea of racing indoors using online platforms, describing himself as 'a real cyclist, not a virtual one'.

The three-time world champion lives in Monaco, where the coronavirus restrictions prevent people from going outside to exercise.

With the cycling season recently rescheduled to the Autumn, he has had to hit the home trainer in a bid to maintain his condition.

"I hate to ride on the rollers, but now they are my friend," Sagan said in a video Q&A on Instagram.

While Sagan is using a team-supplied Wahoo smart trainer to start building for the races later in the year, he has drawn the line at using it to race 'virtually'.

Many pros have been taking part in virtual races from the confinement of their homes, with a number of Sagan's Classics rivals notably taking part in a 'lockdown' edition of the Tour of Flanders.

"We will see how long this period will be, but Zwift races, with my condition, with what I’m doing, with my preparation and stuff, I don’t think so," Sagan said.

"I am a real cyclist, but not a virtual one. If this is gonna be the future... I don’t think so. Maybe I can do some races on Zwift with an electric bike. What do you think about that? Just kidding."

'We have to take care of others'

Sagan has been at home in Monaco since returning from Paris-Nice in early March. As a precaution, he self-isolated for three weeks, having his food delivered by teammate Oscar Gatto. Since then, he counts himself fortunate to have been able to spend more time with his son.

"I wanted to keep a low profile," Sagan said, apologising for a lack of social media updates.

"My family and I are doing fine. I train on the rollers and carry out my core training schedule on a daily basis but I obviously miss training and racing on the road, like everyone. I look forward to getting back to our normal previous life but, for the moment, we have to follow the official instructions and stay home."

Earlier this week, the UCI announced the new salvaged 2020 race calendar, with the Tour de France pushed back to August 29-September 20, followed by the World Championships, Giro d’Italia, and Vuelta a España. The Monument Classics, major targets for Sagan, will be thrown in between on as yet unspecified dates.

"After they made the schedule for the next part of the season, I have to keep in shape. If some races are going to happen, I have to be ready," he said.

"The UCI, together with the main race organisers, are trying to do their best for our sport in this difficult and exceptional situation. This is the first time we encounter such a crisis but I know the experts know how to proceed much better than I do. For me, it’s just about waiting and follow the rules. When the conditions allow us to race again safely, we will bee back on the road so that fans can enjoy this beautiful sport again."

Sagan finished by acknowledging that the sport of professional cycling pales into insignificance when it comes to the scale of the coronavirus pandemic.

"We have to take much more care of others, and respect this situation," he said.

"I am healthy, I’m staying home, I’m seeing my son, I’m training, I’m doing my things. I have no problems. A lot of people around the world are suffering much more, and we have to have some respect for them, and be more human."