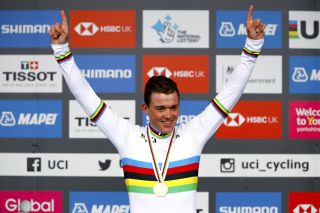 New world champion Mads Pedersen will race in the rainbow jersey for the first time at the one-day Eurométropole Tour in Belgium on Saturday, October 5.

The Dane will also compete at Tre Valli Varesine in Italy on October 8 before bringing the curtain down on his season at Milano-Torino the following day.

"I still can't believe I really did it! For sure, it will be very special to line up for the very first time in my rainbow jersey and I am happy I get to show it still, before I end my season,” Pedersen said in a statement released by his Trek-Segafredo team on Tuesday.

Pedersen won Paris-Roubaix and a World Championships silver medal as a junior, and announced himself at WorldTour level with second place at the Tour of Flanders in 2018. On Sunday evening, the 23-year-old acknowledged that his mode of racing would change in the rainbow jersey.

“That will be impossible from now on. That's a new situation for me to be in. I'll have to race in a new way from now on."