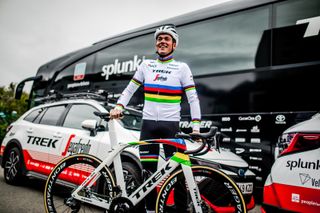 Mads Pedersen signed a lucrative new contract with Trek-Segafredo after his World Championships win last autumn but the recent news of his teammate and friend Jasper Stuyven extending with the team was just as important for a team looking to establish a lasting foothold in the spring Classics.

Stuyven was on the radar for a number of teams, not least Israel Start-Up Nation who were keen to beef up virtually every department of their team. Chris Froome joins at the start of 2021 but with Nils Politt set to move to Bora-Hansgrohe next year, the team were looking for a new leader for the cobbles.

Stuyven, however, decided to re-sign with the American WorldTour team for the next two years, extending his tenure at the only professional team he has raced for since turning professional in 2014.

For Pedersen the news of Stuyven’s new contract was a welcome boost. The pair work well together on the bike and enjoy a healthy friendship away from racing.

Mads Pedersen: I want to honour the beauty of the rainbow jersey

“For me personally it’s super nice. He’s one of my best friends and I really enjoy racing with him. We also had a lot of talks and if you spoke to him I think he would agree that we race stronger together than we do apart,” Pedersen told Cyclingnews during a Zoom interview with the media at the weekend.

“I actually want to see that guy win some races and if he’s in front of me and winning I’m almost as happy as if it was myself. For the whole Classics group it’s also really important.”

Trek-Segafredo have struggled at times on the cobbles since the retirement of Fabian Cancellara in 2016. Stuyven has shown flashes of brilliance winning both races of Belgian’s Opening Weekend, while Pedersen finished second in the Tour of Flanders back in 2018. Both riders were below their best in last year’s spring races but their talent is unquestionable and the team will be hoping to see the pair compete in races like Flanders and Paris-Roubaix for years to come.

“We’ve really started to build up a strong group. Last year was complete shit for all of us but we showed with his win in Omloop that we’re getting back on track and that we’re building up a strong team for the Classics.”

Pedersen returned to racing at the Vuelta a Burgos on Tuesday, finished 146th on the opening stage. It’s not a race in which he is targeting stages but the world champion is building up nicely ahead of the cobbles races that are scheduled for later this year.

“I’m starting in Burgos next week and to be clear that’s not a race for me at all. Poland, there are some opportunities to do some good results but I want to win the national championships again, and then of course I’m racing the Classics to win. I want to win a Classic this year to show what I couldn’t do in the spring.”

The world champion will also head to the Tour de France and while the race is stacked with mountain stages the race will offer the Dane the chance to find his best form ahead of the Classics. He will also support Richie Porte and Bauke Mollema on the flats but Pedersen is adamant that recovery will be crucial when it comes to tackling so many races in such a short period.

“I’m doing the Tour but last year Kim Anderson told me that the Tour was too hard and with too much climbing. Then we came to this year and he said I had to do the Tour even though there’s more climbing. I’m in for the Tour, and I’ll be there to help out Richie. Maybe one on stage I’ll have a chance but the main goal is to help Richie,” he said.

“It’s going to be a shit-hard block of racing for the next two or three months. There are 45 race days in two and a half months. I don’t know if that’s the best preparation but with this situation we have to race, and we have to show the team jersey.

“Maybe it would be better if the Tour was only two weeks and then there would be another week before Worlds and BinckBank but as it is right now we’ll see. The main thing in this season is to be able to recover. If you can recover you’ll manage to be good into October.”