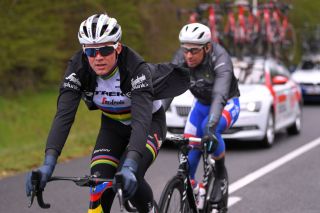 The reigning road race world champion, Mads Pedersen, is likely to ride the rescheduled Tour de France from August 29-September 20 before turning his attention to the postponed spring Classics, of which the bulk are this season set to take place in October due to the coronavirus pandemic.

Now in his fourth year with Trek-Segafredo, Pedersen has so far had relatively few opportunities to show off his rainbow jersey, although he did ride the Tour de l'Eurométropole, the Tre Valli Varesine and Milano-Torino at the end of last season.

He has also still raced more than most riders so far in 2020 – 16 days – having raced the Tour Down Under, the Cadel Evans Great Ocean Road Race, Omloop Het Nieuwsblad, Kuurne-Brussel-Kuurne and Paris-Nice ahead of the competition shutdown in March.

"It's super nice to finally see a race calendar again, so now we have something to aim and prepare for," Pedersen said on his team's website. "The last few weeks we have spent riding but without a real goal in mind, so it's helpful to have the calendar again and to get back in the rhythm for racing.

'Whenever it happens, Paris-Roubaix will be my big goal' says world champion Mads Pedersen

"Obviously, my targets remain the Classics, and I still hope to ride the Tour. For sure, the Classics will be my main goal, and they're at the end of the season, so I'm really looking forward to them, and am hoping for a wet Paris-Roubaix this year," said Pedersen.

The borderline-mythical 'wet Paris-Roubaix' was last seen back in 2002, when it was won by Belgium's Johan Museeuw. Since then, dry, dusty conditions have prevailed for the race, which normally takes place on the second weekend of April.

Its new, proposed date of October 25 this year is unprecedented; the weather in northern Europe at that point could be almost anything: still warm as a hangover from summer, or overcast and windy – or perhaps bucketing it down with rain.

Pedersen finished second at the 2018 Tour of Flanders – and this year's Ronde has been rescheduled in its 'rightful' place, a week before Roubaix, on October 18 – but the 24-year-old Dane is looking to make amends for a 2019 Classics season during which things didn't go his way, and his best result was 33rd at Gent-Wevelgem.

"Racing is racing, and we'll be ready whenever the Classics are on," said Pedersen. "It's OK to move the races when the world is in this situation; we will adapt to it and be ready.

"It's nothing special in my mind, and I'm not thinking a lot about it," he admitted. "I'm just looking forward to starting racing again.  It will be a cool experience to do all the big races in such a short period. It's something new for everyone, and it's going to be nice."