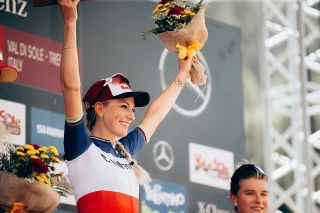 Pauline Ferrand-Prévot (Canyon-SRAM) has undergone successful surgery to treat a recurrence of iliac artery endofibrosis, she announced on social media Friday. The mountain bike world champion is currently recovering in hospital and did not confirm the length of her recovery period.

"The operation went well. It was a little longer than expected (2h) but my super surgeon is satisfied!" Ferrand-Prévot wrote in a post on Twitter.

Ferrand-Prévot back in surgery for iliac artery issues

Ferrand-Prévot revealed in November on 2018 that she was diagnosed with double iliac artery enofibrosis, in one spot in each leg. She had been experiencing pain and circulation problems in her legs since 2015, when she was a triple world champion – road (2014), cyclo-cross (2015) and mountain bike (2015).

She underwent surgery to correct iliac artery endofibrosis in both legs in February of 2019 and took four months off to recover.

She made a winning comeback at the MTB World Cup in Val di Sole and went on to win the UCI Mountain Bike World Championships in Mont-Saint-Anne, Canada at the end of August.

Although she returned to cyclo-cross racing this fall, she later announced that she had been experiencing abnormal symptoms in one leg. Upon check up with her doctor it was confirmed that she was having a recurrence of iliac artery endofibrosis.

Ferrand-Prévot said the endofibrosis was less severe than the first time, however, surgery was scheduled for Friday.