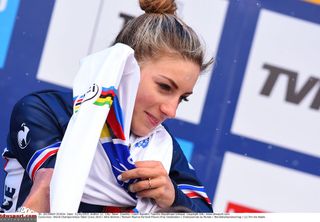 Pauline Ferrand-Prévot (Canyon-SRAM) is scheduled to undergo another surgery to treat iliac artery endofibrosis, a condition that knocked her out of competition for four months one year ago.

The French rider, a road, cyclo-cross and two-time mountain bike world champion, returned to competition last summer and won her first race in August, the cross country race in the UCI Mountain Bike World Cup in Val di Sole. She went on to win the world title at the UCI Mountain Bike World Championships in Mont-Saint-Anne, Canada at the end of August.

She returned to cyclo-cross after missing last season but has struggled to find the kind of power that led her to the world title in Tabor in 2015.

"For the past 15 days, I have experienced abnormal symptoms in the left leg during cyclo-cross," she wrote on her Facebook page. She consulted with her doctors and got a quick answer.

"The diagnosis of a recurrence of iliac artery endofibrosis was confirmed yesterday (same side, above my old operation).

"This lesion, although less severe than the old one, requires surgery. So I'll have surgery on Friday."

Ferrand-Prévot had a previous setback while racing the Tokyo Olympic Test Event in October, breaking her nose in a crash and having to undergo surgery.