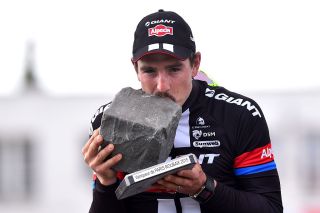 Paris-Roubaix is naming a cobbled sector after 2015 winner John Degenkolb (Lotto Soudal). The German will see his name applied to the sector that runs from Hornaing à Wandignies to Hamage as reward for his efforts in saving junior Paris-Roubaix last year.

The sector is among the longest in the race, measuring in at 3.7km. The four-star sector, the 13 th in last year's race, came 76km from the end of 2019 Paris-Roubaix, which was won by Degenkolb's new teammate Philippe Gilbert.

Last February, Degenkolb started a Gofundme page to help save the race, which is organised by the Vélo Club de Roubaix Lille Métropole, after hearing that it was under threat due to a €10,000 shortfall in funding.

In a message on the page, Degenkolb said that the news "hit me like a bomb." The crowdfunding effort went on to raise €17,661, with the entire amount going to the race organisers.

Gilbert hits back at Degenkolb doubters

Degenkolb: Gilbert and I want to take Lotto Soudal to a new level

"Thank you so much for your support of the Paris-Roubaix Junior race," said Degenkolb after the fundraising effort was complete.

"As soon as the donations arrive from the Gofundme platform to my account, I will directly transfer the monet to the Paris-Roubaix Juniors volunteer John Malaise and the Amis de Paris-Roubaix. I am overwhelmed and words can't express how thankful I am for your support. Thank you."

Degenkolb himself didn't ride the race as a junior, but went on to win the race in 2015, outsprinting Zdenek Štybar a year after finishing second behind Niki Terpstra. Roubaix was also the scene of one of his most famous victories, at the 2018 Tour de France.

Then riding for Trek-Segafredo, the German took an emotional win on stage 9 – his first WorldTour victory since a car crashed into him and several Giant-Alpecin teammates during a training camp in early 2016. Degenkolb suffered a fractured a forearm and almost lost a finger, losing four months of the 2016 season as a result.

This year, Degenkolb has joined Lotto Soudal after three seasons spent at Trek-Segafredo. He'll link up with Philippe Gilbert at the Belgian squad, with the duo set to head up an intriguing cobbled Classics team. Degenkolb will start his 2020 campaign on January 30 at the Challenge Mallorca, a series of four one-day races held on the island.