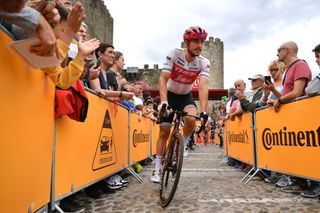 John Degenkolb is looking to take his new team Lotto Soudal up level as he links up with fellow Paris-Roubaix winner Philippe Gilbert in 2020.

The German makes the move after spending three years at Trek-Segafredo, and along with Gilbert, will look to revive the squad's cobbled Classics fortunes. Since Peter Van Petegem's Flanders-Roubaix double in 2003, the Belgian team have a solitary Gent-Wevelgem to their name, courtesy of Nico Mattan in 2005.

"We've already had the first team meeting and roughly talked about what the direction will be, especially for the Classics," said Degenkolb in an interview with Radsport News. "We want to take the team to a higher level and achieve more success than in the past."

Degenkolb looking forward to Lotto life with Ewan and Gilbert

The signings of the duo, who have seven Monument victories between them, were announced just days apart in mid-August. Degenkolb, who has also enthused about the prospect of racing alongside sprinter Caleb Ewan, said the announcement gave them opportunities to talk during the Vuelta a España, adding that the pair have a good understanding.

"It was already clear during the Vuelta that we would both switch to Lotto Soudal," he said. "We already had a few opportunities to chat. We understand each other well.

"In the spring there will be a lot of overlapping and we'll be on the road together – even in the winter – to create a certain structure in the team."

The schedules and season goals of both Degenkolb and Gilbert have yet to be finalised, with the 30-year-old declining to reveal anything just yet. But the cobbled Classics are bound to be a major aim.

It's also no secret that 37-year-old Gilbert is looking to take a victory at Milan-San Remo – a race Degenkolb won in 2015 – before he retires, something he pointed out as he posted a Twitter video riding of him through a San Remo railway tunnel adorned with placards of past winners.

Degenkolb was also quiet on the reasons why he left Trek-Segafredo, something he also didn't talk about when he spoke to Cyclingnews at the season-ending Tour of Guangxi. The German wasn't selected for the Tour de France this year, but would only say that the decision didn't affect his own choice to move on from the American squad.

"It's not as if you're looking for another team if you're not taken to the Tour," he said. "That was definitely not the reason why I left the team."

Degenkolb will soon get a chance to meet up with Gilbert and his new teammates, with Lotto Soudal holding their end-of-season training camp and team presentation on the island of Mallorca, Spain in mid-December.

Passing through this fantastic old railway cycle tunnel in Sanremo, hoping to be up there myself one day! 🤞#Season17 pic.twitter.com/kP5RJGOZpRNovember 19, 2019