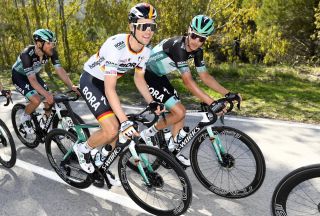 Max Schachmann (Bora-Hansgrohe) lies second overall at the Volta ao Algarve heading into the decisive final weekend, level on time with race leader Remco Evenepoel (Deceuninck-QuickStep). But with the hilltop finish at Alto do Malhão and the final day time trial lying ahead, the German isn't putting pressure on himself to overhaul the young Belgian.

Instead, the race, his first of the season, has been all about getting back into rhythm. That's not to say the results so far – a close second place on Alto da Fóia – aren't encouraging.

"I don't really put a lot of pressure on myself because I came here just to get into the racing rhythm," Schachmann told Cyclingnews at the end of stage 3 in Tavira.

"The bigger goals are next month and in April, and I'm really happy about the stage result but it shouldn't cause a bigger pressure on my shoulders.

"I'll see how the legs feel on Malhão – hopefully they're similar to stage 2, and if that's the case then I'm going to try."

Formolo, Schachmann give Bora-Hansgrohe two on the podium at Liège-Bastogne-Liège

Schachmann was eventually pipped to the line by Evenepoel on the queen stage of the race on Fóia, having chased down the 20-year-old's late attack in the closing metres of the climb. He was the strongest of the men Evenepoel left behind 400 metres from the top, surging back but not quite making it past the Belgian.

"It was really close," Schachmann said. "My legs are feeling good. It's always a kind of surprise to see where you are after the winter, and I'm happy about my form and condition. It was a regular, normal off-season. I had a good preparation so far."

At this early stage last year Schachmann was taking on the UAE Tour where he eventually finished 13th overall, taking a seventh place on the summit finish at Jebel Jais along the way.

He would go on to enjoy a glittering spring, winning the GP Industria & Artigianato, a stage of the Volta a Catalunya, three at Itzulia Basque Country, and taking third at Liège-Bastogne-Liège after placing fifth at the Amstel Gold Race and La Flèche Wallonne.

It might be jumping the gun to extrapolate improved February performances into an April improvement but Schachmann said that the signs are encouraging, adding that he hopes he has grown stronger as a rider since last season, the best so far of his three-year pro career.

"I feel a little bit better this year at this time," he said. "Last year, during the UAE Tour, I got better day-by-day, but now I'm already quite good on the second day. That's a good sign, I hope. Like I said, I'm really happy about everything right now.

"I hope I've improved. That's always the goal. We're going to see in the next two, three, four months."

In order to arrive at the Ardennes in peak form, Schachmann's spring schedule has been tweaked compared to 2019. March will see him take on Strade Bianche, Tirreno-Adriatico and Catalunya, while Amstel Gold Race is out – part of a plan to stay fresh for a return to the Giro d'Italia, where he won a stage on his debut in 2018.

"I can't start in Amstel because it's too much. I'll do the Classics and then the Giro – that's a goal as well. At the moment, my focus is to win stages. I'll prepare myself as best as possible and we'll see how it goes in Italy.

"I saw that there are many options to do that. We have hard mountain stages, there are possibilities through breakaways and also three time trials. Plus, there are short kickers at the end of some stages, so there are a few options at the Giro."