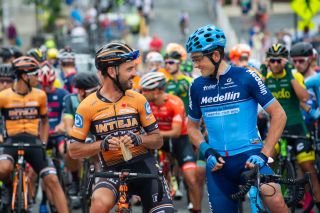 Oscar Sevilla has renewed his contract with the Colombian Continental outfit Medellin to keep on racing through his 44th birthday, according to CyclingPro.net.

The Spaniard turned professional more than 20 years ago with the Kelme team and raced 13 Grand Tours - winning the Tour de France best young rider classification in 2001 - before being named in Operacion Puerto and leaving the WorldTour.

In 2017, Sevilla told Cyclingnews that if it hadn't been for Operacion Puerto, he would not be as happy as he is now. After struggling to find a team in Europe he joined the American Rock Racing team and raced the Vuelta a Colombia, winning stage 9.

Sevilla: I feel very proud and privileged to continue riding

Sevilla may race while awaiting opening of B-sample

He fell in love with one of the podium hostesses and later moved to Colombia and joined the local Gobernacion De Antioquia-Indeportes Antiquia Continental squad. However, his first season was marred when he tested positive for Hydroxyethyl Starch (HES), which is banned as a potential masking agent. Sevilla insisted he was given the substance as treatment after a crash. He fought the doping ban but eventually was handed a 12-month suspension.

When he returned in 2013, Sevilla showed no signs of slowing down, winning the Vuelta a Colombia three times, the Tour do Rio twice and the 2018 Vuelta a San Juan following the disqualification of Gonzalo Najar for doping.

Sevilla is not the oldest pro in the 2020 peloton, however. Francisco Mancebo, half a year his senior, signed a new contract with the Matrix Powertag squad. Mancebo is also still performing well, taking fourth overall in the Tour of Japan and winning the Ronda Pilipinas this season.