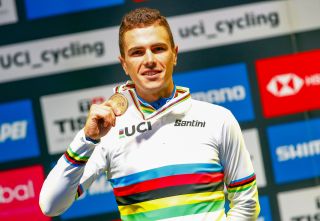 Samuele Battistella (Italy) couldn't hold back his shock and surprise after being handed the rainbow jersey at the UCI Road World Championships in controversial circumstances in men's U23 road race after Nils Eekhoff (Netherlands) was disqualified.

Eekhoff crossed the line first after a tense and dramatic seven-man sprint on the streets of Harrogate with Battistella banging the bars in frustration after narrowly missing out on victory.

However, after a lengthy delay, the race jury decided to investigate the result and ultimately disqualified Eekhoff after they found that the Dutch rider had drafted too long behind a team car following a crash earlier in the race.

Why the jury waited until the outcome of the race to investigate the incident is still unclear but Battistella was quickly ushered to the podium to receive the rainbow jersey while Eekhoff left the race in floods of tears.

"For the first 30 seconds I didn't really understand what happened," Battistella said in his winner's press conference.

"They said that I was now the world champion and that I was first but now I understand everything. Now that I can see this jersey and this medal… I can't find the words. It's amazing. I'm just really happy," he added.

While delighted with the outcome Battistella expressed his sympathy for Eekhoff over the situation.

"I'm really sorry for the guy. I don't know him but he was the winner but I don't really know what happened with the commissaires but I'm the world champion."

When asked if he felt like a winner, given the extraordinary circumstances, Battistella reiterated his stance. Although fans and other professional riders appeared up in arms over the decision on social media, Battistella can take no blame for how the jersey arrived on his shoulders.

"It was a really hard decision because this is the world championships. I think that's why the jury took a long time for the disqualification. This isn't something that happens every day. That's why I think it took a long time. At first, I didn't believe it but after a few minutes, the sensations are amazing. I can't describe it. I'm the world champ."

The UCI refrained from making a detailed comment but later released a short comment that confirmed that Eekhoff had been disqualified for 'sheltering behind or taking advantage of the slipstream of a vehicle (for some time)' which contravenes rule 2.12.007 Art 4.7 of the UCI rules.