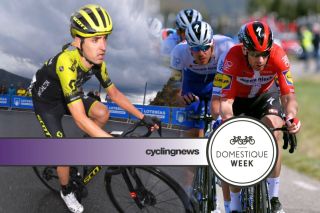 After a week of voting during the Cyclingnews Domestique Week, Michael Mørkøv (Deceuninck-QuickStep) and Mikel Nieve (Mitchelton-Scott) face off in the final Twitter poll for the title of Cyclingnews 'Best Domestique in the World'.

The two riders came though the opening rounds and then won their respective semi-final polls to secure a place in the final.

Mørkøv was part of the best sprint support and lead-out group of domestiques and scored 43.2 per cent of the vote in the semi-final, beating Tony Martin (Jumbo-Visma), Tim Declercq (Deceuninck-QuickStep) and Daniel Oss (Bora-Hansgrohe).

In praise of the domestique

The Dane is known for his superb lead-out skills and is Deceuninck-QuickStep's number one lead-out man. In 2018 and 2019, he helped Elia Viviani stack up win after win. He helped new signing Sam Bennett win the opening sprint at the Tour Down Under and then Race Torquay before the Cadel Evans Great Ocean Road Race.

Mørkøv then helped Bennett at the UAE Tour before flying home early and going through temporary isolation to win the Madison world title on the track with Lasse Norman Hansen. He also rode Paris-Nice in support of Bennett, before the COVID-19 coronavirus pandemic exploded and racing was stopped.

Nieve made it through to the final of the  'Best Domestique in the World' poll via the Grand Tour mountain domestique group.

The 35-year-old Basque rider rarely makes the headlines but is a highly valued member of Mitchelton-Scott after joining the Australian WorldTour team from Team Sky. He stepped up to win a mountain stage of the 2018 Giro d'Italia after Simon Yates cracked and lost the maglia rosa. Last year he rode both the Giro d'Italia and the Vuelta a España, finishing tenth overall in his home Grand Tour.

Nieve has ridden 18 Grand Tours and was given a new two-year contract with Mitchelton-Scott last autumn.

"He has a wealth of experience. He has been there before and because we've got a young group, it's great to have a guy with so much experience. He leads by example, he's a very, very solid guy," directeur sportif Matt White said.

To cast you vote in the final of 'Best Domestique in the World', click on the Twitter link below. The winner will be announced at the weekend.

Michael Mørkøv and Mikel Nieve face off in the Cyclingnews Best Domestique in the World poll. #CNBestDomestique Finalists:Michael Mørkøv (Deceuninck-QuickStep)Mikel Nieve (Mitchelton-Scott)Click below to cast your vote.👇👇 pic.twitter.com/40YO4QBrazApril 3, 2020