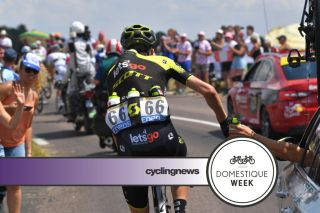 A key domestique duty is to collect bottles for your teammates (Image credit: Getty Images)

The loss of the so-called Flemish Cycling Week to the coronavirus pandemic leaves a gaping void in the cycling calendar, but this week on Cyclingnews, we're turning it into Domestique Week.

A peloton is made up of nearly 200 riders but only one can win and, throughout the week, we'll be shining a light on those who turn their pedals in the interests of a fellow rider.

There's a certain romance attached to the word of 'domestique', linked to the notion of the humble servant and unsung hero. However, the reality is often more gristly, and we'll also examine an underbelly where loyalties are fragile and money talks.

We'll also try to determine 'Who is the best domestique in the world'. Throughout the week, we'll be asking the riders themselves for their votes, and we'll also be asking you, the readers, with the results to be revealed later in the week.

We'll keep this page updated with all the links to the stories as they are published.

We kicked off on Monday with an in-depth interview with Tim Declercq, the two-metre Belgian who is known as 'El Tractor' and has never won a professional race.

On Tuesday, we ran a full feature from a recent edition of Procycling magazine, with some of the most consistent and versatile domestiques speaking about their roles. Luke Rowe, Stefan Kung, Marcus Burghardt and more tell us about brushing shoulders in the bunch and keeping their leaders safe.

On Wednesday, we wound back the clock to the late 1980's, when Eddy Schepers was caught between two leaders: Stephen Roche and Roberto Visentini.

"I'm going to have to sit up and wait for Visentini," he told Roche on the infamous stage to Sappada at the 1987 Giro. "Unless… Well, if I help you, I'll need to be certain that we'll be riding together next season."

On Wednesday afternoon, we ran an extract from Charly Wegelius' book: 'Domestique'. The closing passage is a gripping evocation of a helper's relationship with victory, as Wegelius, in the final year of a winless career, finds himself off the front in sight of the finish line...

On Thursday, we picked out those moments where a domestique has stepped out of the shadow of their leader and had a rare taste of victory. From Haga and Keisse to Tiralongo and Marangoni, there are some great moments.

On Friday, we spoke to Italian journalist Marco Pastonesi, who created a 'Domestique's Club', where he glorified helpers and where winning a race was seen as an act of treason. "They're the real heroes of the sport," he tells us.

Also on Friday, we interviewed Christine Majerus, who's widely considered the top domestique in the women's peloton. The Boels Dolmans road captain told us all about what it's like to support the number-one team in the world.

Throughout the week, we asked you, the Cyclingnews readers, to vote for who you think are the best domestiques. We narrowed it down to 16 contenders, who went up against each other in four rounds of voting on Twitter ahead of Friday's grand final.

On Saturday, Mikel Nieve (Mitchelton-Scott) was announced as the Cyclingnews readers' Best Domestique in the World', after beating Deceuninck-QuickStep lead-out man Michael Morkov.

The results will be revealed on Sunday.