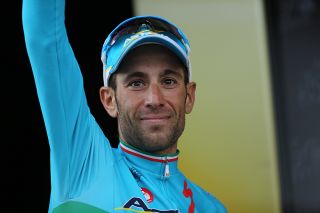 Vincenzo Nibali (Trek-Segafredo) returned to racing on Sunday on race 5 of the Digital Swiss 5. The Italian who finished fourth in Paris-Nice didn't manage to crack the top 10 behind winner Rohan Dennis (Team Ineos) in the power-driven virtual race, however. He did give an interview on former Italian professional Raffale Ferrara's Instagram Live show this weekend where he recounted one fateful day that elevated his public image - in not the best way.

"Do you know how I got the blue check for all my social media accounts?" Nibali asks on the show, referring to the mark that indicates an account is verified. "By getting thrown out of the Vuelta Espana, the team car tow."

Speaking from his home in Lugano, Nibali defended himself, saying it wasn't his fault. In one of the most controversial moments of the 2015 season, Nibali was seen hanging onto the team car on stage 2 while trying to get back to the peloton after a crash. It was a key stage with a short uphill finish and Nibali's then-Astana team had lost 30 seconds in the opening team time trial.

The crash with over 30km to go was critical and it took what seemed to be ages for Nibali to get a replacement bike. He had the company of several teammates in trying to chase back. Once he used up his teammates' energy, however, he found himself in a group where no one was willing to cooperate. With 16km to go, the group was 35 seconds behind the leaders and directeur sportif Alexandre Shefer came alongside in the team car and the rest is history.

"Shefer came to the room and apologized, but I was put out of the race," Nibali says.

"As you know I broke my bike and I was delayed. On the way back, I lost my bidon on a bump and the jury didn't want me to take the slipstream. The Kazakh DS (Shefer) joined me and as he passed me more water bottles, he pulled me so hard that I risked ending up in the ravine. The helicopter was overhead and took the shot that went around the world."

Nibali ended up making it to the front group by the base of the climb, but the effort from his chase saw him lose 1:28. The jury classified him in 31st place until the video of his turbo bottle ricocheted around social media and circled back to the officials, who decided to eject the Italian from the Vuelta even though his team begged for a simple time penalty.

"It was only once we were back at the hotel, during the massage with Pallini, that I learned of the disqualification."

Although he issued an apology, Nibali says he was massacred by "endless jokes".

"I returned home so angry that I trained like a beast and won all the following races, except one beaten by [Davide] Rebellin (the Coppa Agostoni ). I was going like an airplane."

Nibali went on to win the Coppa Bernocchi, Tre Valle Varesine and Il Lombardia that autumn.