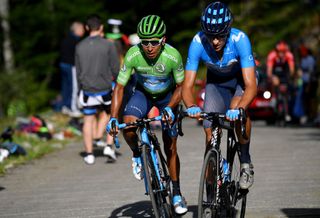 On a day when Slovenian cycling ruled supreme at the Vuelta a España, Movistar general classification duo Nairo Quintana and Alejandro Valverde both recognised that Jumbo-Visma's Primož Roglič was the strongest in the race, but limited their losses all the same.

Unlike Astana, working for an attack by Miguel Ángel López that never materialised,   the blue jerseys of Movistar had barely been visible in the peloton on the interminable series of smaller climbs that preceded los Machucos.

Finally, Quintana made the first of the GC attacks halfway up the final ascent before being reeled in by stage winner Tadej Pogačar (UAE Team Emirates) and then dropped, whilst Valverde continued at his own pace.

The Movistar leaders were then unable to respond when Pogačar and Primož Roglič (Jumbo-Visma) attacked, with Quintana finally regaining enough ground to finish fifth, one spot behind Valverde.

With a 27-second time loss on Pogačar and Roglič for both riders, but a 31 second advantage over López, Valverde remains in second overall, whilst Quintana drops down from fourth to fifth.

However, with Roglič proving on los Machucos he is currently the best GC performer in the mountains in the second week, as well as Pogačar taking time, too, Valverde recognised there was, at least for now, little to be done but withstand the blows from the Slovenian duo as best he could.

"Roglič is the strongest of the race, and Pogačar, too," Valverde said. "Nairo and I have done what we could. We continued at our own pace, but we knew that Roglic would go for it if he saw any signs of weakness."

After a first week where Quintana and Valverde had the edge on Rogliç and Pogačar, Valverde argued there was still time for the GC pendulum to swing back in their favour. But he did not sound overly convinced that that was really the case.

"Today we've lost time, but another day others can lose time too," Valverde argued. "Or maybe not."

On the plus side, Valverde said, they had gained time on López.

"And that's a bonus for us, of course," he said. "We've done everything we can to lose as little as possible."

Quintana, meanwhile, remained resolute despite Los Machucos suggesting strongly that the GC tides in the Vuelta are flowing increasingly against him.

"We tried, but Roglič is the strongest rider in the race at this point," the 2016 Vuelta a España winner said.

"I attacked at halfway up because I felt good and because I'm the furthest down on GC. It would have been easier to sit on wheels and see what happens, but I preferred to test myself, I didn't want people saying maybe I'd had something left but I hadn't tried.

"Now we've seen how things are shaping out, and we'll have to try other tactics, like long-distance attacks. There are still some crucial stages left, but it won't be easy."