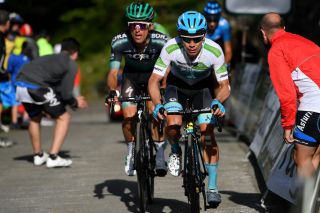 Miguel Ángel López first slumped over his handlebars, then donned warm weather gear and took swigs of a recovery drink without uttering a single word to the press massed a bare metre in front of him, nor to the Astana staff next to him.

Amidst all the crowd noise, the whistle-blowing police, and high-pitched racket of the race commentator, the tiny cloud of silence surrounding the Colombian at the finish of Los Machucos spoke volumes about what had just happened.

When Astana had massed at the front of stage 13 of the Vuelta a España with 30 kilometres to go, laying down a ferocious pace that shredded the breakaway’s advantage of eight minutes to less than three by the foot of Los Machucos, López's intentions to attack on the climb seemed more than clear.

But instead it all went awry. After staying with the front group for more than half the final, ultra-steep ascent, the Colombian was dropped when Primož Roglič (Jumbo-Visma) and Tadej Pogačar (UAE Team Emirates) surged away.

At the summit, López limited his losses to the Slovenian duo to 61 seconds, finishing in seventh place, ensuring this was a battle lost and not the entire GC war.

But being pushed down from third to fourth behind Pogačar, as well as losing the best young rider’s jersey on a day when he looked set to attack nonetheless surely constituted a blow that was very difficult to handle, and even more to discuss with the media.

"It was a very hard day in the last part of the stage," López finally said to the television and radio journalists massed around him. "I didn't have the legs I wanted and afterwards, I just had to give it everything to get to the finish."

"But Miguel Ángel, there's still a lot of the race left," a Colombian radio journalist fired back, clearly trying to boost his compatriot's morale.

"Yes, this isn't over until Madrid, day by day," Lopez replied in the same ultra-flat tone as before, after which Astana team staff closed down the interview almost before it had started.

As teammates like Ion Izagirre stopped briefly to offer López sympathy before pedalling away downhill to the team bus parked several kilometres away, it cannot have been easy for López to see any positive sides to his defeat.

Not only has 'Superman' lost time to Pogačar and Roglič, but two other GC contenders, Movistar leaders Nairo Quintana and Alejandro Valverde, have also gained nearly 30 seconds on the Colombian.

From looking like Roglič's most dangerous rival among the top favourites, now López is now visibly struggling.

Whether this was just one bad day or the start of a more serious decline in form after a storming early start, the team time trial win and three separate days in red is not yet clear. But the fast-approaching mountains of Asturias should quickly provide an answer to that particular question.