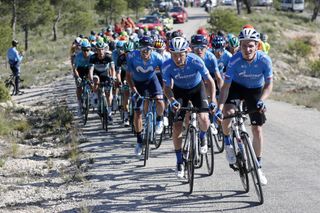 The majority of the Gazprom-RusVelo squad have been allowed to leave the UAE after being quarantined in the Abu Dhabi Yas Island race hotel, the team announced on Instagram Thursday.

The Russian team stayed on the same floor as UAE Team Emirates, whose rider Fernando Gaviria confirmed he had contracted the virus and has been quarantined in hospital, along with Cofidis and Groupama-FDJ. The French teams were allowed to leave the UAE on March 7.

One of the team's riders, Imerio Cima, 22, was discharged from the hospital while two other riders including Dimitry Strakhov and two staff members remain quarantined in the Abu Dhabi Hospital.