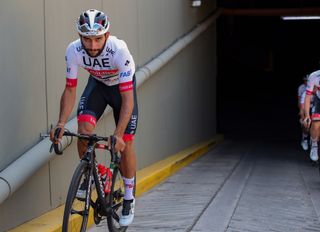 Fernando Gaviria has confirmed that he has tested positive for the Covid-19 coronavirus but insists he is in good health.

The Colombian posted a video message to his social media accounts on Thursday in reaction to the "many rumours" that had been circulating about his health.

Gaviria was presumed to have contracted the virus when the UAE Ministry of Health and Prevention confirmed six cases at the recent UAE Tour, citing one Colombian. Only two Colombian riders were at the UAE Tour and Hernando Bohórquez of Astana was allowed to leave the country after the first round of tests.

The UAE Team Emirates squad and staff members have been quarantined in the UAE since the race was halted on February 27. The team announced on Thursday, March 12 they would finally be leaving the UAE after completing the voluntary quarantine.

"With the negative results of the third and final block of testing and the quarantine period now at an end, the Emirati team have decided to return to Europe.

"This observation period was necessary to be sure of non-contagion for negative riders and staff, and also to allow the time to show the positive results of the others. These measures were to protect the health of loved ones at home, fellow teammates and the wider cycling community.

After an article in the Belgian press which reported that Gaviria had been in hospital for two weeks was widely circulated, the Colombian took it upon himself to set the record straight.

"Hello everyone, there are many rumours circulating in regard to my state of health, but I'm fine," Gaviria said.

"I've been here, undergoing regular tests, which have returned positive for the coronavirus, but I'm feeling fine. Thank you to my team and to everyone at the hospital who looked after me to perfection.

"I'm here to avoid infecting other people, and to avoid this continuing to spread in the way it currently is.

"This is to assure everyone that everything is going well, and let's hope it's all resolved soon."

Alarm bells started ringing when reports emerged in the Colombian press 10 days ago that Gaviria’s family were unable to contact him in the UAE. The UAE Team Emirates squad decided to self-isolate and stay in the UAE for two weeks, until March 14.

Since then, Colombian media have published reassurances from Gaviria’s sister and father, but neither confirmed nor denied if he had the coronavirus. UAE Team Emirates have refused to issue any public updates on the health of individual riders.

However, Gaviria broke rank to address the situation on Thursday after a report in Het Laatste Nieuws stated he was positive for coronavirus and that he had been in hospital for two weeks.

There have been conflicting reports over the number of riders and staff members who tested positive for the coronavirus at the UAE Tour, but Gaviria is the second confirmed case after Gazprom-RusVelo announced on Thursday their rider Dmitry Strakhov had tested positive.

UAE Team Emirates have withdrawn from racing and are not taking part in the ongoing Paris-Nice. They were scheduled to return at Nokere Koerse next Wednesday but have had to pull out due to the lockdown in northern Italy, where their bikes and equipment are housed.