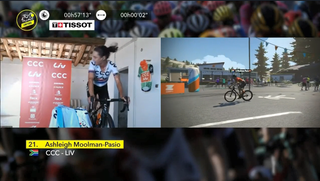 Ashleigh Moolman-Pasio (CCC-Liv) celebrated her first victory in the Virtual Tour de France on Saturday, soloing to the win on stage 5 on the simulation of the Mont Ventoux climb to Chalet Reynard on Zwift. The South African champion was shut out of last week's stage when her computer locked up but this time enjoyed a flawless race and, surprisingly, all of the exposure that comes with a Tour de France stage win.

In the virtual post-race press conference, Moolman-Pasio expressed her pleasure at the sudden turnaround by the Amaury Sport Organisation. Before the coronavirus pandemic, they put on women's Classics – La Flèche Wallonne and Liège-Bastogne-Liège – as well as La Course by Tour de France but never afforded the riders the same level of promotion. This year, ASO not only added equal stages for women in the Virtual Tour de France but surprised everyone by announcing a Paris-Roubaix for women and a possible women's Tour de France by 2022.

"Until this year I would have written off a Tour de France as an opportunity we'd have to create for ourselves," Moolman-Pasio said. "I'm quite blown away and surprised at the way the ASO have embraced the women in the Virtual Tour de France on their Twitter feed - and all their feeds – they're including us which they've never done before. Usually, with La Course there's been a (separate) La Course Twitter feed – there's never been any interaction between the Tour de France social media and La Course social media. So to actually get the exposure on all their platforms is pretty amazing."

Moolman-Pasio credited Zwift for its inclusivity, which she speculates may have influenced the ASO when it came to the Virtual Tour de France.

"I've no doubt that it has a lot to do with the fact that Zwift has placed a huge priority on equality. That's just evidence – when you have one brand that's powerful, especially in this time, and they place a priority on women's sport – it really gives us a huge leg up. I think it's a great opportunity for women's cycling," she said.

The ASO announced that La Course by le Tour de France would take place in conjunction with the Tour de France Grand Depart in Nice. World champion Annemiek van Vleuten expressed her disappointment at the 96km race being 'only two laps with a third category climb' – "Not really WorldTour level" – but Moolman-Pasio is still setting the race as a goal.

"It looks pretty good. It will be interesting this year because there won't be time to do many course recons," Moolman-Pasio said, adding she'd previewed the course on VeloViewer. "We do have great technology to get a good idea of what to expect. For me, it will be a target. I'm going into my first races next week in Spain and then Strade Bianche, then I have a little break to do altitude training, then La Course will be the next race. I'm looking forward to that."

She will also target ASO's other offerings including Paris-Roubaix, which she said came as a huge surprise when it was announced earlier this season. "It's not something that I was expecting any time soon, nevermind this year. I must say, hats off to our UCI president [David Lappartient], I think he played a huge role in putting pressure on the ASO to do a Paris-Roubaix race for us. The women's peloton is definitely hungry for the challenge. We're going to relish the opportunity and do our best to make the most of it. I don't know exactly what to expect. I know that it's a tough race and totally different to Tour of Flanders. I know the team is putting a lot of preparation into it in terms of equipment choices."

CCC-Liv hired retired Dutchman Lars Boom as a performance manager with an eye at preparing riders for the unique qualities of Paris-Roubaix. Moolman-Pasio says the team is relying on him to prepare them for the race.

"He's really experienced when it comes to that race. We've had some meetings on Zoom with Lars, and he's been very involved in the service course, making sure the team has been in close contact with Liv to make sure we have the right bikes. For example, our Liv Langma bikes can't fit a 28mm tyre, we can only fit a 25mm. For Paris-Roubaix, it's essential to have the right tyre choice and pressures, so I know new frames are on the way," she said.

Moolman-Pasio and the rest of the women's peloton are preparing to resume racing at the end of the month with a trio of one-day races in Spain: the 1.1-ranked Emakumeen Nafarroako Klasikoa, Clasica Femenina Navarra and Durango-Durango Emakumeen Saria – the first major events since the Omloop van het Hageland on March 1. She is in uncharted territory having endured the longest break from racing in her career.

"There's no doubt the first races are going to be pretty nervous and it's going to take a couple of races before things really settle down," she said. "For myself, I'm really confident. I'm feeling that I've had the best preparation ever. I've remained productive and motivated throughout this lockdown period. I'm looking forward to giving it my best go."