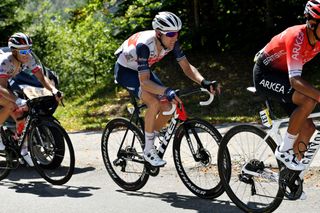 Trek-Segafredo have all but ruled out Bauke Mollema returning to action again this season after their Tour de France co-leader crashed out of the race on stage 13.

The Dutchman came down in a fall that included Romain Bardet with roughly 86km remaining on Friday. Bardet continued but was later pulled from the race after hospital checks after the stage revealed that he had sustained a concussion.

Mollema, on the other hand, was taken straight to hospital for x-rays, where he was diagnosed with a fractured left wrist. The 33-year-old had been siting 13th overall before his crash.

"It was technically perfect. Both the surgeon and team doctor were very happy with the results. Bauke will travel home today to continue his recovery."

Romain Bardet out of Tour de France with concussion

Mollema had "sustained a complex fracture of his left wrist: a fracture of the radius and ulnar bones as well as a scaphoid fracture" and also received five stitches due to an injury on his lower lip," the team said.

Normally, a crash at the Tour de France and six weeks off the bike would mean that a rider could possibly return to racing for the end of the season but this year, with the calendar re-written due to COVID-19 and the Tour shunted into late August and September, it means that Mollema’s season is likely to end.

"Predicted recovery time is 6 weeks, although we don’t expect Bauke to race again this season," the team added.

Mollema came into the Tour de France with consistent form. He finished fourth as he tried to defend his Il Lombardia title and picked up two top-10 performances in the two stage races he completed before the Grand Départ, and had recently signed a new contract with Trek-Segafredo that keeps him at the team for the next two years.

While the loss of Mollema is a huge blow for Trek-Segafredo’s ambitions in the Tour de France, they still have Richie Porte riding high in the overall standings. The 35-year-old put in a sterling ride on the summit finish on stage 13 to rise from 11th to ninth on GC. The Australian is set to leave the team at the end of the year, with Ineos Grenadiers the likely destination.