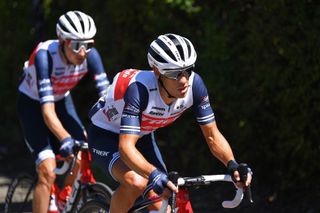 Richie Porte (Trek-Segafredo) rolled back the years on stage 13 of the Tour de France to deliver one of his best performances of the race so far.

The Australian finished 14th on the stage to the Puy Mary in the Massif Central after Daniel Martinez (EF Pro Cycling) won from the day's break. Despite losing a small amount of time to race leader Primož Roglič (Jumbo Visma) and now second-placed Tadej Pogačar (UAE Team Emirates), Porte was the best of the rest and put time into all of his rivals, bar Mikel Landa (Bahrain McLaren)

With Guillaume Martin (Cofidis) and Romain Bardet (AG2R La Mondiale) both losing time and dropping out of the top 10 on the general classification, Porte's performance saw him rise from 11th to ninth.  The 35-year-old heads into stage 14 with a 2:06 deficit to yellow jersey holder Roglič.

"The penultimate climb was super hard and that's where the first explosion was in the bunch, but on the last climb it was only in the last kilometre that I recognised the climb from the 2016 Tour, and it was an absolute grovel to the line," Porte said.

Only Roglič could follow when Pogačar put in two killer attacks on the final climb, but Porte managed to hold his own, leading a small group that included Mikel Landa and Miguel Ángel López clear of the rest of the GC contenders, including Nairo Quintana, Rigoberto Urán and last year's winner Egan Bernal.

"The two Slovenians are the strongest guys in the race finish just behind them is a good result and to put some time into some of the other guys in the top 10 felt good," Porte added.

"It's still quite a short climb and it was really only the last two kilometres that were hard, so you know that the time gaps are never going to be huge. Sunday on the Grand Colombier – that's where the time gaps are going to be big, so hopefully I get through Saturday and fuel up tonight because today was a hard day."

The stage, however, was a bittersweet affair for the American team with Bauke Mollema coming down in a crash with 86km to go. The Dutchman, who was also in contention for a top-10 place in Paris, was forced to leave the race in an ambulance. He was later diagnosed with a fractured left wrist, which could potentially end his entire season.

"We lost Bauke in a crash after about 100 kilometres, which is not nice, especially as it sounds like quite a complicated injury. We wish him all the best but afterwards it's obviously hard to focus again on the race, but I think that it went well for us. The guys were really good and put me in a good position, and I had good legs today," Porte said.

"It is very bittersweet but hopefully the next two days are hard stages, so I hope that we can keep chipping away at the GC game."