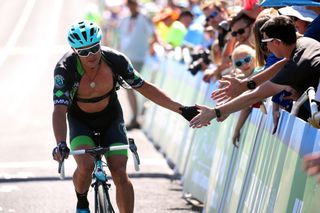 Travis McCabe is close to signing with Israel Cycling Academy for 2020, according to a person familiar with the team's recent roster moves.

Neither McCabe nor the team would confirm the signing, but Cyclingnews understands the team will make an official announcement in the next few days.

McCabe is the two-time and reigning US criterium champion who raced for Floyd's Pro Cycling this year after spending two years with United Healthcare, one year with Holowesko-Citadel and three seasons with Team SmartStop.

Floyd's Pro Cycling will not return in 2020

The 30-year-old American fastman has nine professional wins, including four stages at the Larry H. Miller Tour of Utah, three stages at the Tour de Langkawi, a stage at the Colorado Classic and another at the Herald Sun Tour. McCabe was also second to Peter Sagan (Bora-Hansgrohe) this year on stage 1 at the Tour of California while riding for the US National Team.

Cyclingnews reported earlier this week that McCabe was in talks with a WorldTour team in the wake of news that Floyd's was shuttering for 2020, but the rider and team had not yet come to terms.

Israel Cycling Academy has raced at the Pro Continental level for the past three seasons but will jump to the WorldTour next year after acquiring the Katusha-Alpecin WorldTour license and some of the team's riders. The Israeli team also signed German sprinter Andre Greipel for next year, as well as Classics and GC man Dan Martin.