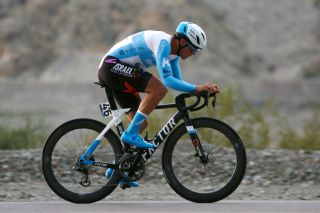 Travis McCabe (Israel Start-Up Nation) continued to climb nearer to a podium result Saturday during stage 5 at the Tour Colombia 2.1, where he finished fourth in a chaotic sprint in front of a massive and boisterous crowd in Tour de France champion Egan Bernal's hometown of Zipaquirá.

The two-time and reigning American criterium champion survived through the highly technical final two kilometres and was well-positioned for the sprint on the wheel of stage winner Sebastian Molano (UAE Team Emirates) before getting bumped off in the chaos and finishing behind Molano, Alvaro Hodeg (Deceuninck-QuickStep) and Jhonatan Restrepo (Androni Giocattoli-Sidermec).

The hilly 180.5km route from Paipa to Zipaquirá was hardly straight forward for the fastmen, as they had to make it over three categorised climbs in the first 115km and then recover for the finish, which included a hard 90-plus degree right turn just before 1km to go, and then another inside 1km.

"I came ripping in, probably 15 riders back, and came into that corner super hot and took the outside line and was able to hold it," McCabe told Cyclingnews. "The Maxxis tires we have are nice because you have a lot of confidence in the cornering, so I was able to slam on the brakes super late, take the corner super hot and get into like fifth position with 2k to go, and then it was just a drag race to the finish.

McCabe just shy of victory at Tour of California

"I was on Molano's wheel with maybe 700 metres and then got knocked around by Hodeg," he said. "I need to fight maybe a little more for those wheels and pay more attention to those guys coming up. I just made a few mistakes, and it cost me."

The result is McCabe's best since moving from US Continental team Floyd's Pro Cycling to the WorldTour with the Israeli outfit. He started the season last month at the Vuelta a San Juan in Argentina, where he grabbed sixth and 11th in two sprint stages there. So far in Colombia he has grabbed two eighth-place finishes while sharing sprint opportunities with Colombian teammate Edwin Avila and Israeli Itamar Einhorn.

"Fourth is good, but it's not really what I wanted," McCabe said. "I'm always looking for more, but it's been a steady progression throughout these two races already. The fitness is good, and hopefully it will lead to more stuff in the future."

McCabe has had to deal with some very motivated opponents in Molano and Hodeg, both Colombians who want to throw their arms up in victory in front of the rabid fans that come out to see them perform. In the five stages so far, Molano has taken all three sprint opportunities.

"It's their home race, and it's all the Colombians, so it's always nice to be the first gringo across the line," he said. "It's been an awesome experience, and Molano is just flying right now. High-altitude sprints aren't easy."

Getting to the sprint at the end of the stages isn't easy either, as Saturday's stage started above 2,500 metres of elevation and included three climbs that reached nearly 3,000 metres.

"There are no easy sections in Colombia," McCabe said. "Even when you're on a flat road, you're going 70k an hour or even faster. There was not a lot of talking today. It was fast all day long. It took a while for the break to establish, and then once it did it was just a nice steady tempo by EF [the team of race leader Sergio Higuita – ed.] up everything."

Israel Start-Up Nation contributed to the chase that brought back the breakaway with about 16km to go, and then the team moved Edwin Avila and McCabe into position for the sprint.

"The profile was a bit deceiving from what we actually had at the finish line," McCabe said. "I was kind of expecting more of an uphill – a little bit more of a climb or a flat finish, and that was a pretty quick downhill. It was a chaotic sprint. It was crazy. I think it was one of the more chaotic sprints we've had at this race."

With his US criterium racing experience, McCabe thrives on the technical finishes and was hoping to use those skills to reach the podium.

"You come flying in at 90k an hour into a 90-degree turn, and then straight into the sprint," he said. "For me it was good. I like the technical races and actually having corners in the finish. Edwin was able to put us in good position, but in the end it was left to just me floating and Edwin floating; we couldn't connect."

Although he was disappointed to miss out on a podium finish, McCabe can take heart from the fact that he is moving closer with each race. With Sunday's queen stage finishing on the climb up Alto del Verjón at 3,290 metres, however, his chances for that podium result in Colombia are now over.

"Not tomorrow, for sure," he said, "but there are more races to come."