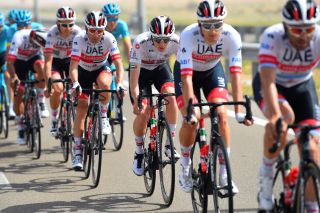 UAE Team Emirates manager 'Matxin' Joxean Fernández is back in Spain after undergoing a voluntary coronavirus quarantine in the UAE after the cancellation of the last stages of the UAE Tour in February. As Fernando Gaviria and Max Richeze, two of the team's four coronavirus cases, are still in the UAE awaiting to be cleared to travel home, Fernández reflected on the team's early-season performance and what the rest of the year might hold while recognizing that sport comes secondary to public health in an interview with Ciclismointernacional.com.

There have been some reports that Gaviria has had several negative tests in recent days and could go home as soon as Monday, but Fernández declined to give any updates to protect their privacy.

"These are personal issues that they took it upon themselves to publicize. Out of respect, I think it's best that they talk about it, not me," he said.

After the coronavirus cases were confirmed, the entire UAE Team Emirates group at the race stayed put for several weeks in order to ensure they were all virus-free.

"It really was a voluntary quarantine, because we had the backing to get out of there," he said. "But [Team Principal Mauro] Gianetti made the decision and we supported him. It was a perfect place to spend those days. Everyone was excellent to us."

Although the race was less than a month ago, the UAE Tour seems as far away as last season, but the performance of the team this season and late last season has been a remarkable improvement from the squad's early days since transitioning from the defunct Lampre squad to the reformulated current outfit.

Gaviria showed himself to be back on form with a trio of stage wins in the Vuelta a San Juan and Tadej Pogacar won the overall Volta a la Comunitat Valenciana before taking the last stage of the truncated UAE Tour.

"We were on an upward trend, not only in terms of results but also in terms of self-confidence," Fernández said. "There was an increase in our responsibility and role in racing and it will continue to be so. The group grew a lot, unity is the key."

Pogacar missed his chance at the overall when Adam Yates escaped with 7km to go on stage 3 to Jebel Hafeet. "Yates was very strong that day. We thought we could be with him when he attacked 7km from the finish line. Tadej got pretty close to him, but it was a much stronger Yates and nothing else. When someone is stronger, all that's left is to congratulate them and look for alternatives, like we did later."

Gaviria did not have much luck in the sprints, but Fernández dodged the question of whether the coronavirus had affected him before the race was halted. "Gaviria was in excellent condition, he had great numbers and we took on a race with a chance of winning in the sprints and winning in the mountains, we balanced the team for both disciplines with Troia, Bystrøm and Richeze helping Fernando and he showed he was there to win and strong. And also with Pogacar, Formolo and Ulissi for the mountain."

The coronavirus pandemic and the Tour

The outbreak had hit cycling first in Asia with the cancellation of the Tour of Hainan, but the cases within UAE Team Emirates and Gazprom-Rusvelo were the first hints over how devastating the pandemic would be for the WorldTour.

At the moment more races are being cancelled than rescheduled, the Giro d'Italia is off, and the elephant in the room is the Tour de France and what will happen if it too is postponed. If the Tour does go forward, it will be "at two speeds", some speculate because riders are being restricted from training outside in some countries but not in others.

"It's clear that competing in inequality is not a concept of sport, but the circumstances are what they are," Fernández said. "And if some are more trained than others, some will have to delay their schedule and others will enjoy the benefit of being more competitive from the start.

"Preparation is handled as it can be. Those who can't go out on the road will have to do more on the rollers, have more willpower, more mental capacity because riding rollers diminishes you. It's more difficult to do two hours on the rollers than four outside. The motivation is not the same, and this strengthens the head because the easy moments are spent by anyone."

Doing 11 hours on the trainer as Laurens de Vreese did on Friday, Fernández said was "excessive".

"11 hours is excessive even on the road, everyone knows what they have to do or should do," he said, adding that riders should be in contact with their trainers to best plan how to maintain their form with no specific schedule in sight.

"I think we're all going to be penalized in one way or another. Some for not being able to compete, others for not being able to train... right now, to know who is better or worse off is to talk about individualities. We have to look for the common good, and the advice that is being given in most countries is to stay at home and respect it."