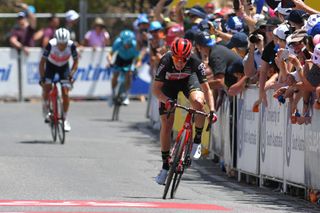 Lotto Soudal’s Matt Holmes powers to victory on stage 6 of the 2020 Tour Down Under, leaving the hitherto king of Willunga Hill, Richie Porte, in his wake (Image credit: Getty Images)

Second place on the final stage of the Tour Down Under on Sunday was enough for Trek-Segafredo's Richie Porte to win the overall Tour Down Under title, but a new king was crowned at the top of Willunga Hill: British neo-pro Matt Holmes, riding in his first WorldTour event with new team Lotto Soudal, found enough power to first follow and then beat Porte, ending the Australian's run of six straight wins on the climb.

"It's a pretty good start," a delighted, but perhaps slightly shell-shocked, Holmes told reporters at the finish.

Having told Cyclingnews ahead of the race that his Lotto Soudal sports director Herman Frison had given him a free role to try his luck on the finish climb at Paracombe on stage 3, where Holmes took a modest 31st place, the 26-year-old from Wigan got another chance on stage 6, and grabbed it with both hands.

Holmes was initially part of the 26-man move that escaped early on the 151.5km stage from McLaren Vale to Willunga Hill on Sunday. With him was teammate Jon Dibben – the former Sky rider who, like Holmes, joined Lotto from British domestic team Madison Genesis for 2020 – and it was Dibben who worked hard with the other riders in the break to maintain the gap over the peloton.

"It was perfect, really – my old manager [Roger Hammond] would be proud. He always had a go at me for doing too much, so today I did the absolute minimum. I had the easiest ride of probably anyone in the whole race," smiled Holmes.

On the second and final ascent of Willunga Hill, with Porte launching a powerful attack to leave overnight race leader Daryl Impey (Mitchelton-Scott) floundering, and with just the remnants of the break, including Holmes and Sunweb's Michael Storer, still hanging on at the front, the smart money was on Porte to take a seventh straight victory on the climb.

"I just had to go with Richie when he came past," explained Holmes. "He had obviously gone a hell of a lot quicker than me up there, so he had no sprint left."

Holmes looked almost nonchalant as he came around Porte in the final few hundred metres and sprinted home with a clear three-second gap back to the Australian.

Holmes admitted that he'd initially struggled with the step up to WorldTour level at the start of the week, but concluded that he'd maybe become suited to it after six days after all, having taken victory.

"I've been trying my hardest to ride well for the GC, but I kind of couldn't handle the speed and the danger in the bunch, so I really didn't do well for the first few days," said Holmes. "Even last night I was saying that I didn't know if this was for me, because it's too dangerous, so today is a bit of a turnaround."

He added that the win would give both him and his team a huge confidence boost.

"Until now, in meetings and stuff, they didn't really believe in me – rightly so – because I was the new person, so they'd just given me the easy job, and said, 'Just ride on the front and do what you can,'" said Holmes, who finished sixth overall at last season's Tour de Yorkshire before being picked up by the Belgian WorldTour team.

"Now they'll obviously have a lot more faith in me, and I'll not feel bad for saying, 'Ride for me today,' so it's a good start."

Asked he was ever concerned that he might become the villain for taking the 10-second bonus at the finish for winning the stage, potentially upsetting either Porte or Impey when it came to the finely balanced fight for seconds in the battle for the overall, Holmes was pretty adamant that such things weren't on his mind.

"No," he laughed. "No – there's no time to think, really. All I thought was, 'Great, Richie's coming and he's not going to slow down, and he's just going to take me to the finish,' as he's obviously riding a different race, so all I had to do was beat him, so, yeah, it was quite simple."

While nothing was certain for the neo-pro's race programme going forward, Holmes now hopes that his victory will allow him a little more freedom to choose which races he might attend.

"Nothing was definite, but I'm sure now I'll be able to decide a bit more what I want to do. I just want to do races like this, really – short stage races, which was my original plan. And then maybe a Grand Tour – either the Giro d'Italia or the Vuelta a España. But I think I'd have to do something much better than today if I want to go to the Tour de France," he smiled.