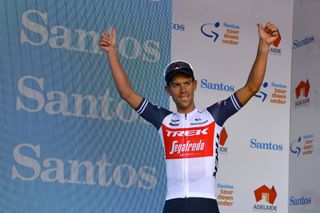 Richie Porte gets some podium time at the Tour Down Under (Image credit: Bettini Photo)

After a week of pressure, expectation and intense racing, Richie Porte (Trek-Segafredo) showed poise and personality to produce his usual powerful surge on Willunga Hill to secure overall victory at the Tour Down Under and pull on the winner's ochre-coloured jersey on Sunday.

Porte started the final stage two seconds down on main rival Daryl Impey (Mitchelton-Scott). The Australian WorldTour team tried to unnerve him by refusing to chase a strong 26-rider break but Porte and his Trek-Segafredo team kept their nerve before he then took flight on the three-kilometre climb of Willunga Hill.

Britain's Matt Holmes (Lotto Soudal) pulled off a huge surprise by staying with Porte in the final kilometre and then beating him to the line to become the new king of Willunga Hill but Porte was just happy to win the overall.

Tour Down Under Stage 6 – Live Coverage

"It would have been nice to be the king of Willunga Hill again but I'll take the ochre jersey any day," Porte said with a happy, satisfied smile.

"It's fantastic to win again. For our team to also win the Women's Tour Down Under [through Ruth Winder] and then for me to win the men's race, it's a great race for us."

Porte's Trek-Segafredo teammates were clearly not as strong as Mitchelton-Scott across the six stages, but rode their hearts out for their team leader and survived everything Mitchelton-Scott threw at them.

When Mitchelton-Scott ignored race etiquette and refused to lead the chase of the 26-rider break, Porte and directeur sportif Kim Andersen stayed cool, and then Trek-Segafredo chased hard at the right time. The flat roads around McLaren Vale turned into a game of poker, but Porte knew he had an ace up his sleeve.

"It was a hard day out for our team, and at times I thought that maybe the GC was over and done with, but credit to the guys – they pretty much brought it all back and it's a great feeling to finish their work off," Porte said in praise of his teammates.

"Mads Pedersen pretty much single-handedly took two minutes out of the 26 guys up the road. When he won the world title [last year], he called me a few days afterwards to say that he'd come to the Tour Down Under and help me to win it. He kept his word. All the team, including the two young neo-pros and Kenny Elissonde, stepped up to help me win."

Porte accepted that Mitchelton-Scott's tactic was part of a final showdown.

"I understand Mitchelton-Scott's perspective. Matt White came up to me this morning and shook my hand and said it was a battle. There's no loss of respect. We knew it was my race to win. It was great to just finish it," he said sportingly.

While his teammates did the vital work before the final climb of Willunga Hill, Porte stayed cool and on the wheels, ready for his big, final moment centre stage on the iconic Tour Down Under climb.

When Porte danced on the pedals but pushing a big gear, he first distanced a suffering Impey, then eventually shook Mitchelton's Simon Yates off his wheel, too, surging away from all his overall rivals before blasting past the remains of the breakaway.

"I think it's one of the faster times we've done up here. Bike races don't get any easier to win," Porte said, admitting he went deep yet again.

"When Yates was sat on my wheel, the mind-battle starts a bit because he's a fantastic little bike rider and I knew that I had my work cut out. I knew I had to ride him off my wheel. He's got youth on his side and I'm getting on a bit, so to finish it off like that was great."

Porte seemed surprised to see that Holmes was able to hold his wheel and even jump past him in the final 200 metres to win the stage.

"He's a neo-pro and a Mancunian, where my wife is from, so he must be a good bloke," Porte said, joking with respect. "Credit to him, and Lotto Soudal had a fantastic week, with Caleb Ewan also winning two stages. Hats off to him – I think he's going to be a fantastic rider in the future."

Back to winning ways

Porte is due to ride the Cadel Evans Great Ocean Road Race next weekend in Geelong, near Melbourne, but will then return to Europe, with a soft landing and a return to racing at the three-day Tour Cycliste International du Var et des Alpes Maritimes near his home in Monaco. His next major WorldTour race will be Paris-Nice in March, with the Volta a Catalunya more of a major goal.

Porte had not won a race since last year's Tour Down Under stage on Willunga Hill. He finished fifth at the Tour of California and was 11th at the Tour de France, but ended his season early, sensing it was never going to be a vintage year. He opted to recover with his family and spent much of the winter at home in Tasmania, preparing for the Tour Down Under.

"It's nice to win a bike race again," Porte admitted. "I had a good two-month stint in Tassie, just training with my mates. My wife has been fantastic, looking after our little boy, too. Everything has just gone well; we've kept it simple for the last two months and it's great to come back here and win the Tour Down Under."

Porte has no doubt worked hard to be at his best for the Tour Down Under. The efforts might again come with a prize when he returns to Europe, but Trek-Segafredo hope to have found the right balance between racing, training, time in the Southern Hemisphere and his return to racing in Europe.

"Everyone has their opinions on peaking and stuff but, being from Australia, to win the Tour Down Under is a great satisfaction," Porte said.

"I won't let anyone take any of this success away. I've worked hard and now I know I can still win bike races, so it's good for the season that is coming."