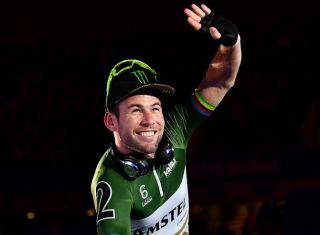 Mark Cavendish will take to the boards again this autumn when he lines out at Six Day London, which takes place at Lee Valley VeloPark from October 22-27. The Manxman has participated in the event on two previous occasions, in 2016 and 2017.

"I am incredibly excited to announce that I’ll be back competing at Phynova Six Day London in October at the iconic velodrome," Cavendish said in a statement on Wednesday.

"Six Day London is one of the UK’s leading track cycling events, and from previous experience I know how competitive the field will be. It’s a great event for elite cyclists and it allows another opportunity to prepare for 2020 in the most competitive arena, against some of the best riders in the world."

Cavendish will share top billing at the event with Olympic omnium champion Elia Viviani, who last week confirmed his participation in London. Cavendish claimed the bronze medal behind Viviani at the Rio 2016 Olympics.

The Italian will avail of the London event to prepare for the following Track World Cup in Minsk as he seeks to secure qualification for the Tokyo 2020 Olympics.

"I am pleased to see Elia Viviani named as a fellow rider at Phynova Six Day London, he is a quality athlete and we have always enjoyed a healthy rivalry so I’m sure we will give the fans something exciting to watch," Cavendish said.

Cavendish has finished in second place on each of his two previous participations at Six Day London. In 2016, he was partnered by Bradley Wiggins as they placed second behind Moreno De Pauw and Kenny De Ketele. Twelve months later, Cavendish and his fellow Manxman Pete Kennaugh had to give best to Cameron Meyer and Callum Scotson.

Cavendish, whose contract with Dimension Data expires at the end of this season, has yet to clock up a victory on the road in 2019 and he endured the disappointment of missing out on selection for the Tour de France squad. The 34-year-old raced at the Tour de Pologne and the European Championships road race in recent weeks, and he is due to participate in the Deutschland Tour, which gets underway on Thursday.