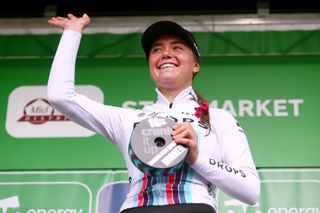 The Lotto Soudal Ladies team have announced the signing of British rider Abby-Mae Parkinson from the Drops team. The 22-year-old will target the one-day Classics with the Belgian team.

Parkinson, a former junior national champion in cyclo-cross, is racing in the Superprestige for the first time in five seasons.

"It gives me the speed that I need. As a junior I did cyclo-cross and became multiple national champion, but I hadn't done it for the past five years. It was a bit of a shock at first, but now I'm used to it again. At the beginning of next year I'll plan a training camp in Gran Canaria to further prepare for my first road season with Lotto Soudal."

Parkinson impressed with a solo attack from the breakaway on stage 1 of the Ovo Energy Women's Tour this year. The move was ultimately brought back for a sprint finish won by Jolien D'hoore, but Parkinson claimed the combativity prize for the stage.

"I love making a race and being able to attack. If we race in the UK I would of course like to show myself to the crowds," she said.

"I have big dreams for the future, too. Every professional cyclist wants to be a world champion or Olympic champion. Winning a monument like the Tour of Flanders or Strade Bianche would be a dream come true too. Maybe one day. Fingers crossed."

"I'm excited to start this new adventure. Lotto Soudal is such a great team and racing for the team will offer me a lot of opportunities. I'm very much looking forward to racing next year and helping out my teammates. I'm more of a Classics rider myself. I'm from Yorkshire, so I'm used to bad weather and I like racing in tough conditions," she said.

"Next year I want to help out my teammates wherever I can. I've never been involved in a proper lead-out, but I'd love to practise that next year and help out Lotte Kopecky and the other fast girls. I hope to have some chances of my own in smaller races, where I can race aggressively."