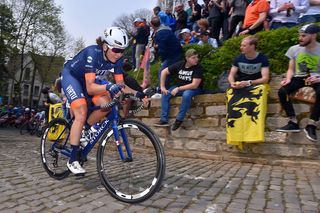 The Lotto Soudal Ladies team has signed 25-year-old Danish rider Christina Siggaard from Team Virtu for next season following the demise of the Danish outfit at the end of this year.

Classics specialist Siggaard – who won the 2018 Omloop Het Nieuwsblad and stage 1 of this year's BeNe Ladies Tour – said in a press release that she was thrilled to be joining a Belgian team.

"I love racing in Belgium, because of the Belgian mentality about cycling," she said. "It gets the best out of me. It was always on the cards that one day I'd race for a Belgian team. There's no team I would rather go to next season than Lotto Soudal.

"When you race in Belgium, you always feel the excitement," said Siggaard. "At a Belgian race, there are always a lot of spectators at the side of the road – not only family or people who are personally involved. Belgians are passionate about cycling and that's something I can relate to. People in Belgium are proud of their races. And I love those spring Classics; they're the highlight of my season."

Virtu – the team owned by former Danish pro Bjarne Riis – is set to close down at the end of the year, with this year's Tour of Flanders winner Marta Bastianelli heading to Ale Cipollini, her fellow Italian Barbara Guarischi moving to Movistar for 2020, and Norway's Emilie Moberg already signed up for the Drops Cycling team next year.

Siggaard said that she hopes to continue to progress in the Classics, and that she has ambitions to improve her stage-racing abilities with her new team, too.

"I'm a puncheur," she explained. "I'm good on smaller climbs. I'm not a top sprinter, but I am fast when we get to the finish with a smaller group at the end of a very hard race.

"I always target the spring Classics, especially the Omloop Het Nieuwsblad, Dwars door Vlaanderen and the Tour of Flanders, and the national championships are always a goal too.

"I'm looking forward to the spring races with my new team," Siggaard continued, "and in the future I also want to improve my time trial skills, because in stage races that's an advantage. That could lead to better GC results in stage races further down the track."

She added that she's in the final semester of her nutrition and health studies, and that she then hoped to "head south" before the new year for some warm-weather training, although not until she's fully recovered from the concussion she suffered after crashing at the Tour of Norway at the end of August.

"I crashed on the penultimate stage of the race, but it only became clear a month later, after the GP d'Isbergues, that I had a concussion. That meant I couldn't take part in the World Championships, but I'm on the mend now, and am feeling better," she said.